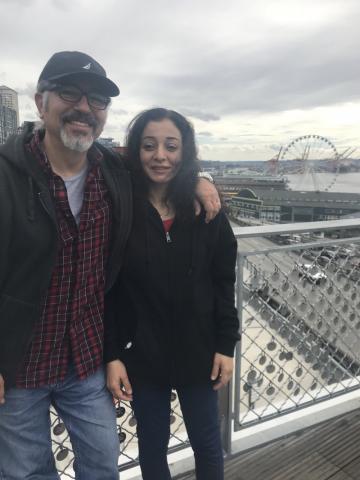 
Abeer Mahmoud Hawamdeh is a 50 year old woman from Amman, Jordan. She moved to the United States with her family after her eldest daughter’s high school graduation in 2015. She was accompanied by her husband and two daughters, 18 and 15.

Finding a place to call home in the United States was a challenge in of itself for the family, because while her husband has two other daughters (from a previous marriage) who live in Southern California, they decided to settle where their eldest daughter chose to go to school (while keeping many things like finances and good schooling for their younger daughter who was still in high school in mind). Their daughter chose The University of Washington, having fallen in love with the campus and the Pacific Northwest. Its stark difference from the dry, sunny climate of Jordan felt like something completely new and different, something that signaled the start of a new chapter in all of their lives.

This brief interview covers her experience landing in Seattle her very first day, landing at SEATAC and taking a cab to the hotel, seeing Seattle for the very first time. She describes all the emotions that came flooding through her and her family, being away from everyone she knew her entire life to start a new one in a very different place later in life to retire.


That day was the fourth of September 19... I still live in the 90s, 2015, and I remember that we arrived to Seattle like noon time and it was a very long trip. We were very tired and we were just trying in the airport to connect to any Internet network so that we can call our family back and Jordan to let them know that we arrived. And I wanted badly to call my mom. And I remember, then after a little while I was able to do that. Then we took a cab and we, we had an address for the hotel. And we loved the scenery when we were driving from the airport to the hotel. And we saw that it's a beautiful city. And we were very optimistic, and we were very enthusiastic or, we felt energized and happy although we were very tired, it was a mixture of so many feelings conflicting feelings like what have we done? and maybe this is a nice thing that we have done that. And it was it was confusing.