" I couldn’t carry my bags in Port Authority and was surprised when a man grabbed my bags and started walking – I thought he would steal my bags, but he gave them to me, told me to have a good day and left." 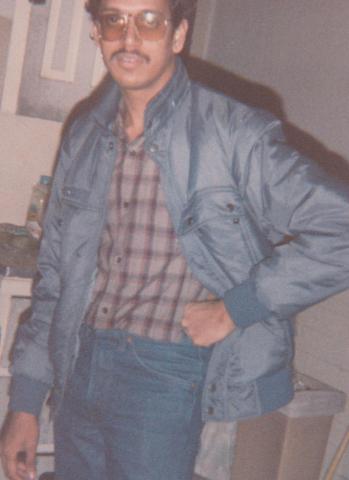 My father often told us he wanted to be a professor and because he wasn’t able to, he hoped one of us would become a professor. I always wanted to go to graduate school in the United States, but due to familial responsibilities, I worked for some time in Bombay. SUNY Buffalo gave me a scholarship, so I came to the U.S. for a PhD in Finance and Economics.

I landed at JFK airport in New York and made my way to Port Authority to take a bus to Buffalo. My family was afraid I’d starve to death in the U.S., so they packed me a 12-liter cooker, other large vessels, and ingredients. I couldn’t carry my bags in Port Authority and was surprised when a man grabbed my bags and started walking – I thought he would steal my bags, but he gave them to me, told me to have a good day and left. Once I reached Buffalo, I took a bus to campus. It was Saturday and the campus was empty before classes started, so I wasn’t able to access the student dorm. I was struggling to walk with two bags when I saw a man go from one building to another and introduced myself. He brought me to his house and allowed me to stay there until Monday, when he dropped me back to campus and helped me get settled in.

What were your first impressions of the United States?

It was like a dreamworld. But everything was different and expensive, and every experience was hard. I didn’t know how to get around Buffalo, it was cold, and I was scared for months to go out to a restaurant to eat. A lot of students in my university who came to the U.S. were from wealthy families and spoke good English and wanted to move to the U.S. I was relatively poor, didn’t speak much English, and didn’t know the American way of life. I had to learn all of that slowly.

My migration gave my family in India peace of mind that I would be able to financially provide for them. It also made me financially independent and mature. If I had stayed in India, I may not have taken the risks I did and learned from them. I got a job at East Stroudsburg University, which was near an ashram, and I became more spiritual and enjoyed the close-knit Indian community in the area, which convinced me in part to stay with East Stroudsburg. I got involved with the local temple and joined the temple’s board, focusing on community service and expanding the temple to serve the local Indian families. While I enjoy teaching, my focus in the last 15 years has shifted to community service. Being community-minded, spiritual and focused on giving back have been changes over time stemming from my migration here.

Through my work, I interacted with students who came from disadvantaged backgrounds without familial support. In India, I used to think everyone in the U.S. was rich. Interacting with my students helped me see myself in them. I enjoyed working with them and providing guidance where I could. America gave me a great opportunity and taught me that we should do our best to help others.

I used to think Americans weren’t family oriented and that they had values that I wouldn’t appreciate. That was totally wrong. I’ve met many American families who have wonderful values, who want their kids to be good kids. It’s a mistake that people think Americans don’t have values. Some values are different from others, but just as important.

Indian hotels! Anytime I go to Chennai, I try the local restaurants, but I think it might be too spicy for me now.