First Days Project
My name is Basudhara Sen.
"I never wanted to leave Kolkata, however my grandmother and mother always wanted me to go abroad for higher studies." 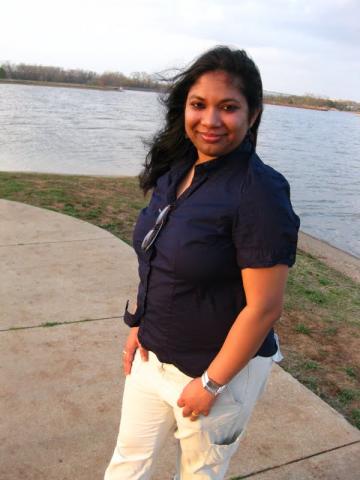 
My first day in the US is still so fresh in my mind. I never wanted to leave Kolkata, however my grandmother and mother always wanted me to go abroad for higher studies. When I got the chance for PhD in the US, I was excited to see a new world. I still remember shopping for US trip. When the day arrived for departure, I tried not to cry, I cried when the flight was taking off. I couldn’t stop tears rolling down my eyes. I was already missing my parents and my beloved city. I couldn’t take much food till Frankfurt airport. However, from Frankfurt onwards I think I was too hungry and excitement was setting in to see the US.

Chicago was my port of entry and there was a long immigration queue and I missed my connecting flight to OKC. I was very worried because that was my first international trip and first flight of my life. But, I had the courage and managed to run from one terminal to the other. One could imagine running and taking shuttles in O’Hare international airport. My professor Dr. Perkins was waiting at OKC to pick me up. So, I bought a calling card and called the department of sociology to inform him (he forgot to give me his cell phone no.). My original landing time in OKC were somewhere around noon, I reached there around 10 pm. I was so worried because I thought I was troubling him too much. But, He and his wife, Kathy were waiting there with smiling faces. Oh! What a relief. When I entered their house, I was thrilled. I never had seen such a big house before. She offered me cheese omelet and toast, and tomato juice. I was very hungry and everything tasted so good so I ate everything. It was around 11:30ish at night. I stayed at their place that night. Next morning, when I realized I am in the US, I was very happy that day, though I was missing my family, but I think I was too excited. My professor took me to a local restaurant for breakfast, I do not remember the name, but the food tasted very good. He ordered two omelets and bacon and a lot of other things I don't remember, but I remember him saying “Americans eat a lot.” Then he drove me to Oklahoma State University and I remember he was taking about Oklahoma weather, the school, American culture, but mostly I remember he was mentioning about red clay of Oklahoma. He asked me whether I have seen red clay before. I said, yes! I did, my all time favorite place Shantiniketan, back home and I shared how beautiful the clay smells during rainy season. After reaching the school, he helped me to do all the administrative work. Big thanks to him. I must add that the warmth I received at my professor’s home on my first day in the US is a precious memory that I will always remember throughout my life.