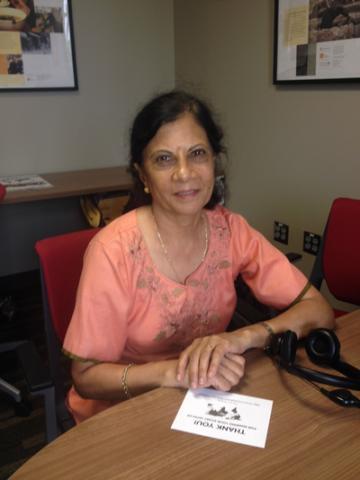 
The first place I stayed was in Virginia, Manassas, and we didn’t have much money. My husband had just started a job but we didn’t want to ask neighbors for any help. The next day he went to work and left me home. It was not a very good neighborhood and I saw some black people moving around and drinking. I was scared and I saw the neighbor was sleeping downstairs with a newspaper and I went and picked up the newspaper and found an ad for an accounting job. I made a phone call then, and explained my background. They said to come for an interview. When my husband came home, I said I had to go for an interview. My husband was friends with a husband and wife and the wife took me, but she said, “in this small town I do not think you’ll get a job.” But I got a job first time as accounts clerk in the school board. I was so lucky and working so hard, but there were some words I did not know. In England when you pick up the phone and someone is not there you say “it’s engaged”, so when I tried calling and they asked I said “it’s engaged” and they started laughing! They said, “engaged to whom? In America we say it’s busy!” “Oh,” I said, “I’m so sorry,” and another time I had to throw something so I asked “where is the dustbin?” and they said “you mean the garbage?” There were so many words I didn’t know in the American way of talking, but I tried so hard. They made me a part of the family. They gave me a surprise housewarming party! I did not know what a surprise party was. When we had bought a small house, we did not have anything in it, so a girl at work came over and made a list and gave the list to everyone at work. Then after work the next day I came in and they surprised me! Wow. They gave me all kinds of things and tears came in my eyes. My husband came home from work and said, “what’s going on?” and I said “I don’t know, this is America!” So I started my life here so nicely because the group that I worked with was wonderful. If you work hard, there’s an opportunity. You have to be positive in this country and show that you are hardworking.