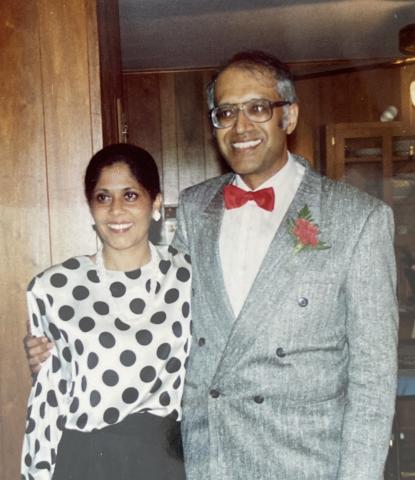 Which city and state did you spend your first day in the US in?

That is a little bit of a tricky question because we traveled for three days by road, so our first day began in Detroit, Michigan and ended likely in Bowling Green, Kentucky. Our first full non-travel day in the United States was in Houston, Texas.

So what brought you to the United States?

Two things, essentially. One was that we wanted to be in the same country as and as close to my parents as possible. They lived in the panhandle in Texas, so that was the reason we came to Texas. The second reason was that the weather, compared to where we were in Canada, was more favorable.

How was your trip over and what mode of transportation did you take?

We drove by car; each day we would drive for a good portion of the day and then spend the night in a motel or a hotel, and we ate along the way. It took three days to reach here from London, Canada.

Having lived in Canada for five years, one always compares, and a couple of things struck me. The first was that when you drove through a city, you saw different parts of it; in the business district you encountered tall, elegant buildings, and then in other parts of the city you would drive through streets that were not clean or looked after. So what struck me was that there was a marked paradox between the very best and the worst. I was used to a homogeneous standard in the Canadian cities.

The other thing that struck me was that the people we encountered were quite willing to talk to you, to engage with you. So as we were driving in a car many, many years ago, the only mode of entertainment was either the radio or a tape recorder. Our kids were young then, so they enjoyed stories and nursery rhymes on tapes. But one time, the tape got stuck and it just kept repeating itself. We stopped in a small town called Texarkana, on the border between Arkansas and Texas and drove into a gas station to see if anybody could help us. Today we would think it is clearly not in the job description of anybody in a gas station! The person we encountered was very friendly, and he managed to remove the tape that was stuck. And then he asked us, “Where are you going?” And so we said, “We're going to Houston.” The guy shook his head and said, “That's a very big city, you really don't want to go there!” I was impressed by his willingness to help and his honesty.

What were some learning experiences you had in your first couple of weeks here, adjusting to life?

I reported to work on the 18th of January. My expectation was that I would get prorated pay for the number of days worked in the first month and get a full pay about six weeks later. So it was a shock (albeit a pleasant one) that they put me on the payroll from January first, and would get paid at the end of January. So I was struck by the consideration for the needs of the employee, rather than just the employer and consideration only to the bottom line. It was a revealing insight and left a very positive impression on me.

Another experience I remember is attending my first staff meeting at seven o'clock in the morning. It was a fairly early time for me to attend a meeting, but so be it; when you're in a new place, you learn the rules of the place, and you follow them. My enthusiasm and anticipation going into the meeting was, “this is the land of the free, and people will speak their mind.” And very quickly, I discovered that out of the 25 or so people that were in the room, nobody did any talking; it was only the chief who spoke. The world was according to what the chief said it was. Everybody agreed or stayed quiet. I was rather struck by that, because that's not what I believed in or was used to. Years later, when I became the chief, I changed the culture of the place to be inclusive and participatory!

What did you find was the biggest difference between America and your home?

Clearly the access to education, and the level of facilities available for the people that provide a high standard of living in the USA. Also, the fact that if you're ready to work hard, there is no barrier to how far you could go. So these were a couple of things that I noticed early on, and then I discovered them to be more and more true as time has gone by.

What do you think is the most difficult aspect of being an immigrant?

The most difficult aspect of being an immigrant are the mannerisms; what is considered usual and normal in America is different from what is considered usual and normal where I grew up. So for example, I grew up in the kind of culture where you don’t bring your achievements out to the front. Whereas I discovered that in America, the first person that has to recognize your worth is yourself and then everybody else follows from that point on. So for me this was a major revelation and adjustment.

Do you think there was anything particular in your experience as being a South Asian in America, especially being an immigrant that was distinct to America as opposed to Canada or anywhere else?

The institutional food that I got at lunch in the cafeteria was clearly something very different from what I eat at home and what I was used to. Until I discovered a few years later that I could bring lunch from home.

What was your favorite part about life in America?

My favorite part, which goes back to what I found early on, is that there is absolutely no limit to what you can achieve as long as you're willing to put the effort in, you're willing to work with others. Your imagination is only what limits you.

What do you think day-to-day life in America was like compared to any expectations or the perception of America in where you're from?

Two things stand out. One is clearly the standard of living and what people aspire to acquire, stand out as higher than what people in Canada, or where I grew up in Uganda. The material standard is higher. The second is that there is great disparity in the population. The rich are very well off, and the poor do not have even the basic needs. And so that is a disappointment certainly compared to Canada where there is a safety net that takes care of the people in need.

Do you think that not growing up in India had any impact on being able to find a racial community or community of South Asians?

An interesting question that you ask. Early on, when I immigrated from Uganda to Canada, we kind of looked at ourselves as different people, quite different from those from India. We only associated with our small limited group. But after coming to the United States, it was the great equalizer. We have met people from different parts of India, people that grew up with different languages, different habits, different religions and yet we have identified with them as our people from the same country. This is very interesting. This was a very refreshing trip back in time, because growing up in Uganda, there were very few people from India there. And so there we grew up as one community, no matter what religion or what language we spoke. Growing up, I played with friends from almost every part of India. So that's how I grew up, but then when I came to Canada, it was retraction into your own small shell. And then coming to the States, it has been a return to the way the world used to be!

Do you think that first coming to Canada, and then arriving in America greatly impacted your immigrant experience?

Yes, for sure. Because if I had come straight from Uganda, then my baseline would be Uganda. But coming from Canada, my training was recognized. Coming from Canada, my examinations were recognized. And because I had my parents here, my immigration status was recognized as well. And so the day I moved into the country I was able to start working right away. I had the educational experience, training and exams that I needed to start working, and I'd already worked for five years in Canada. So clearly, I had an established career and coming to the USA was to build on it, rather than start from scratch.

What, if anything, do you think has changed about the immigrant experience over time?

The word immigrant has gone through many different shades of meaning, a lot of it with negative connotations.. If you look at the United States, it's a country of immigrants by every stretch of the imagination and the indigenous people are very few in number now. So for a land of immigrants what has changed over the years is that the word immigrant has taken on a different meaning. It used to be that we welcomed immigrants, we wanted immigrants, and now, we are at a stage where we don't want immigrants, we want to keep them out, and we want to build walls and so on. There are a lot of negative connotations, and I'm sure you're familiar with that so I'm not going to elaborate on that. But the way I see it is that immigrants bring new ideas, new talents. They also do work in the United States that's essential, like working on the farms. So, I think the word “immigrant” should be something that we should look upon as a positive contribution to our country. I'm not saying that we should open the borders and let anybody come in as they want. But I'm saying that we have a need for immigrants for our economic growth. So we need to re-adjust our thinking on immigrants in our country.

Knowing what you know, now, what advice would you give to a new immigrant coming to America today?

I would say in spite of the skill level, expertise, and qualifications, starting without American experience or American qualification, you may have to start at a lower level than what you deserve. But as long as you are willing to do whatever is necessary you should be excited that there is really no limit to what you can achieve.

If I could advise someone before they come to America, I would say, get the qualifications recognized in the USA and that will make your adjustment easier. And since the early days can be hard, never lose hope.

And overall, are you happy that you came to America as opposed to being in Canada or even Uganda?