"So that I think was the hardest for me; not having family close by was hard." 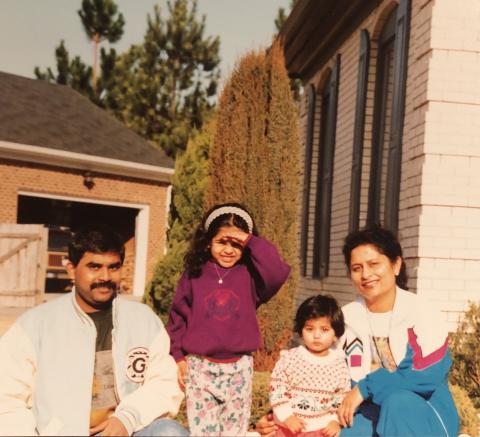 Which city and state did you spend your first day in the United States in?

It's amusing because we were supposed to spend our first night in Rochester, New York, where we were headed, but a bunch of circumstances made it where we spent almost half the first night at the airport. There was this sudden crash landing of a flight and so everything was grounded. It was August 4, 1992, if I'm not mistaken. And so we just hung out at the airport till the airlines found us a hotel in the middle of the night and we made it to Rochester the next day. So JFK, New York, is where we spent most of our first night in the USA.

And which city and state do you live in now?

We live in Houston, Texas.

So what brought you to the United States?

Well, my husband and I left the shores of India in 1984, soon after we completed medical school, to work in Iran. And we worked as general practitioners there, just enough to finance our trip to England, where we wanted to eventually go to further our studies. So we did make it to the United Kingdom and after training there, realized that making it higher and higher in the hierarchy was going to take a very long time, because of the small country it was and the large number of doctors that needed to retire before younger people could rise up. So we looked to see, where else could we go, what else could we do to further our careers as doctors? The United States seemed to offer many of the things we would like to do and so we looked towards here, took the necessary exams, and headed over to the United States of America!

How was your trip over here?

It might have been on TWA; I can’t exactly remember what airline it was. It was an ordinary flight. But like I said, extraordinary at the airport. It was not our first trip to America. We did come for a visit prior to that. But yes, this was with baggage, moving over to the United States.

I think I noticed that people were more friendly. A lot of them would just say hello to you, or just make casual conversation. And I think in England, people were a little more reticent about talking to you. And they did talk to you once they got to know you, but I found that openness in America kind of welcoming. And everything in America was big, huge, and that really impressed me. I realized I better get my driver's license or I wouldn't be able to get around anywhere. The beauty of public transportation in England was a different world entirely. Here you could not depend on that. The supermarket sales were something that was totally new to me. I remember looking for those flyers to come in every week and think, “Oh, this is on sale here, we need to shop for this!” That was kind of an excitement, almost, to get the best price. I used to do that a lot when I first came here. And we slowly settled in. We knew a few friends here and made many more. And then we started our residencies which was another atmosphere we got used to, and just went on with it.

What do you think was the biggest difference or biggest distinction about America compared to India or even England?

I think I can compare more to India, because some things stood out so starkly. And I think what impressed me most was the orderliness of things, the ability to get work done and not having to please anybody or pay anybody to do ordinary things like getting an electricity connection, getting your driver's license, or going into a shop to buy something or return something, everything was so simple compared to India. And I think most of that is kind of the same in Western countries, at least in England and America, those things seem kind of similar. And that made life very easy for us, that the everyday nitty gritty you didn't have to kind of worry about, was a good thing.

What do you think the hardest part of adjusting to life in America was for you?

We came here with two young children. And with both of us pursuing our careers and training and then on to jobs, and taking care of two very young children, made us miss our families very, very much. Both my husband and I had our entire families back in India, and even to make a telephone call, it was so expensive. I think I remember it being something like $1.50 plus per minute so we had to plan and budget for phone calls. Unlike now you can WhatsApp or FaceTime and feel like you're in the same room with people. So that was kind of sad. And it was probably at least a couple of years before we went back to see family. So that I think was the hardest for me; not having family close by was hard.

What was life like compared to the expectations you had had or what the idea of America was in India?

In India, America was all “you have whatever you want, everybody's got a car, everybody's got a big house!” And you see all the glamorous parts of America, which I have to say, once you come here, most of it is true. I don't think any other country in the world has this much homeownership. Wherever you are economically, everyone aspires to have a home of their own and it is within people's reach. And I think that is something wonderful about this country, that if you want something and you want it really bad, you can make it possible for yourself, which doesn't always happen in India. We all grew up with a lot of motivation and encouragement from our parents and that's why we made it to where we are and coming here just makes you realize you can dream and make every dream possible. Yes, you have to work hard, you have to be disciplined but things will happen if you want it badly enough. And I see that all around me in the almost 30 years that we've been here. You know, people from all stratas of society have become successful because they wanted and searched for some kind of goal, and made it possible. That continues to impress me.

There are many differences between life in India and America, what do you think was the greatest similarity for you?

It's surprising, even to me when I say this, because that's not the general impression most people have, but especially working as a physician, I realized that family means a lot to people. It may be demonstrated in different ways, but when I see sick patients in the hospital, and I see how much concern families have for those who are sick in the hospital, you think, family means a lot, even here. And yes, everyone has their differences but I think that is still a big part of America. And I hope that it does not go away. That I think is similar. And the other thing is, it's in a different way, but I love cooking and when I look around me and see so many people so enthusiastic about cooking it reminds me of home and family and all the care and love that goes into cooking and feeding people whether at home or in a restaurant.

Knowing what you know now, what advice would you give to a new immigrant today?

I think everyone who comes to America comes because they like something about America and they want to become part of that. So I think that should always be top priority, that you're coming here for a reason, for something that you like. So bring with you everything that has made you who you are and that you will love about your past life and your culture and your country and blend in with whatever you dreamt of that America was. There's always good and bad everywhere and there's so much polarization now but I think, despite all that, this is a beautiful country and if we want to make it a happy place, we can. So come with all your expectations and don't settle for kind of a mediocre “Oh, I'm going to keep all this from the past and I had expectations but they don't match life here so I will just stay the way I am.” I think we should be willing to accept differences, accept change, and go forward. You look back and take what's good with you, but you don't hang on to everything, you'll see as you grow up, your children are going to have a lot of different thoughts, feelings, and values. And I think we have to learn to accommodate why they think differently and at the same time hold onto things that are meaningful in your life and try to pass that on.

What, if anything, has changed about the immigrant experience over time?

I think that since I came it has become much easier to come to America as a student and that again goes to rewarding good work and accomplishments. You can apply from anywhere in the world and be accepted to the best universities. It definitely has become easier for new immigrants to come across, and whatever the need, whether it's in medicine, whether it's in research, whether it is in IT, if you show that you are worth it, America welcomes you with open arms, and I don't see anything wrong with that. Everyone looks out for themselves, so if you are good, and I need you, I will take you. In a way, you could say that’s just countries being selfish, but I think every country looks out for itself and America is looking out for itself. So if you have something to offer America, America wants you.

And overall, are you happy that you came here?

Yeah. I'm happy to have come here and made a life for myself. And in my own way, I think I've contributed to the country and I've taken everything the country's handed out to me. And I'm happy to be here and to see my children grow up here.