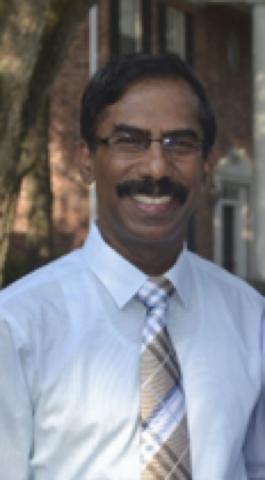 
Dr. Nathan is a leading cardiologist at Memorial Hermann Hospital in Houston and also runs a charity clinic. He is an active member of the South Asian community in Houston and is greatly involved in the local Hindu place of worship, the Meenakshi Temple in Pearland, TX having served on its Board.

Well, I first went to England before I arrived in the United States. We were living in the county south of London called Kent. We lived there for two years with our two little kids at the time. We left London to arrive in New York, a city called Rochester, which is the first city where we arrived in the US.

I am from India. I studied in Thanjavur Medical College. It's a rural town but with a well-reputed medical college. I was a medical student from 1975 to ‘81, and then I had to do a one year of internship in 1982. Then I did a three-year postgraduate degree in medicine. In 1989, I left India to go to England to pursue higher education because I wanted to train in cardiology. So that's my reason for leaving India and going to England. My journey to the US is interesting. I have two kids. My daughter was about five and our son was one year old when we lived in England and our daughter went to school there. When we were living there, it was a very homogeneous country and we, as the immigrant population, lived a very secluded life. I was very well respected in my hospital as a registrar and a young physician. The nurses, the whole staff, and the faculty, they all respected us inside the hospital campus. But, outside of the hospital, it was a whole different world. We were not integrating with the English. And in fact one day, my daughter’s teacher called us for a parent-teacher conference. When my wife and I actually went there and they said, “Your daughter is extremely smart and intelligent, but one thing that we don't understand is why she doesn't go out and play during physical education class.” We were not aware of that. So we came home and asked our daughter, “What happened? Why do you not go out and play? You don't have to be studying all the time.” And my daughter’s response was “Well, nobody would play with me.” So that touched me. The fact that I'm going to bring up my kids here, to what I thought was a better life, and my kids are going to be in isolation and not being integrating with the kids…that's not healthy. And so that was one reason I chose to move out of England, as well as to pursue a higher education.

I wanted to be a cardiologist and by then and I was already well-trained in internal medicine. I was a medical registrar. For cardiology, the United States was cutting-edge. And so those are the two reasons why I chose to come to this country.

When I arrived in Rochester, one of the residents from my apartment building picked us up from the airport. We did not have a car and the apartment was rented through the hospital. When we entered the apartment, we realized it was absolutely bare. So with our eight suitcases, we just slept after a long trip. And I had one more day before I had to start my residency. So within that day, I had to take care of chores, I did not have a driver’s license either. Our son went out to play for a little bit and about a couple of hours later, a lady knocked on the door. The lady’s grandson is the same age as our son. And so she came and rang the bell and then she had a cake. She had baked a cake and it said, ‘Welcome to the United States of America’. So that was a day and light difference for me because I didn't expect that. We did not know that person, a total stranger. It was the warmth of the welcoming nature of the American spirit. This is the country which welcomes immigrants and you can explore your fullest potential in this country. And that was the biggest thing, the welcoming nature, which I could sense even on my day one.