First Days Project
My name is Bobby Chacko.
"On the other hand seeing my mom again was very emotional, since my mom and brother had left us in India 6 months before." 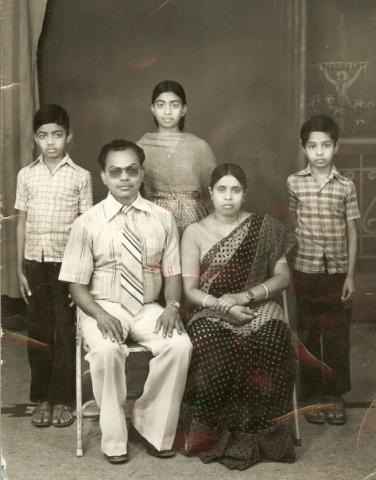 
My name is Bobby Chacko and I live in Philadelphia, Pennsylvania. I migrated to the United States on September 13, 1983 from India.

I traveled with my father, sister and grandparents on from Bombay to JFK. My mother and brother had already arrived March of that year, we waited for the visas to be approved for my grandparents before we could travel. On the plan ride, my father had warned me not to touch the door, since we would all die if the door opened in mid air. I suspect, he figured I might try something like that. I took as many “bathroom” breaks as I could, to keep from being bored. During my many bathroom breaks, I discovered little bars of soap that I couldn’t explain. Why would there be little soap bars on a plane? So, naturally I took one. PanAm Airlines, I may or may not have that little soap bar.

We arrived in JFK late into the night and was completely disappointed in what I saw. There was no Sun and it was just concrete everywhere. I must have thought that the Sun only shined in India, thus it was always night in the US. Standing in the garage of JFK, I couldn’t help know my life wasn’t going to the same anymore. My reply to my aunt’s inquiry of my thought of my new home was less than enthusiastic. If I could’ve swear, I would have. Not knowing any decent curses that appropriately fit the moment, I replied “Its nice!”. On the other hand seeing my mom again was very emotional, since my mom and brother had left us in India 6 months before. I wouldn’t leave her side and thus sat next to her and fell asleep in the car as we headed to our new home in Philadelphia. Waking up the next morning to the sunshine was a pleasant surprise.