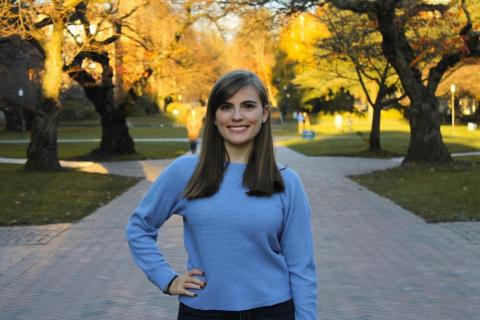 
Tamara Benassuli is an International student from Switzerland. While she has come to the United States before as a tourist to New York a few times, she has only recently come over to a more stable situation here in Seattle. She is here as an exchange student, her second exchange after studying in Canada as an undergraduate. She believes Seattle is very similar to Canada in the outdoorsy elements and the generosity of the people.

She is somewhat familiar with the United States already as she consumes plenty of American culture. Her favorite shows are Grey’s Anatomy, Scandal, Big Bang Theory, and, of course, Friends. She is also a fan of comedians Jimmy Fallon, Ellen Degeneres, and Kevin Hart. She uses them to improve her English and loves that she finally understands their jokes. On reflecting on her first day in America, Benassuli showed evident emotion of both overwhelming joy and also complete exhaustion.


My name is Tamara Benassuli, I come from Switzerland, especially Geneva, and I am an exchange student here at UW, I arrived here in mid-September

I was kind of stressed because I was afraid to miss my flight or that kind of stuff. everything works perfectly so I was really happy.

I had all these border things. that was kinda maybe stressful a little bit, because they always ask you so many questions

One interview in Amsterdam before taking the flight to go to Seattle. So like first you have to answer some questions like “ok why are you going to be there? how long are you going to stay there? they are checking your visa and your documents. So this is the first thing. then you do the nine-hours flight and you arrive in Seattle and then you all again make a huge line and have to wait. I think I waited for more than one hour.

and when you do like, I don’t know, like 15 hours of flight, I think your English is not that great and you’re trying to answer but you’re so tired that sometimes you're like ‘what?” but it’s ok they let me in.

it was really the rush I think when I got here, but it was also great because it is also excitement yeah it was exciting because I was discovering a new city. So It was great.

it took time and at the end, I took, I think I took even an Uber because I didn’t know where to go. But I went to the university village to do shopping and buy also a cell phone. I needed to buy like basic stuff actually for my, for my, apartment like toilet paper or like blankets and- and pillows to sleep.

So I really lived two days in one because I woke up really early to take my first flight, so, I think I had like two days in one. At the end, I was really exhausted