"I remember what I ate on my first day, it was Pringles and I liked Pringles, yeah." 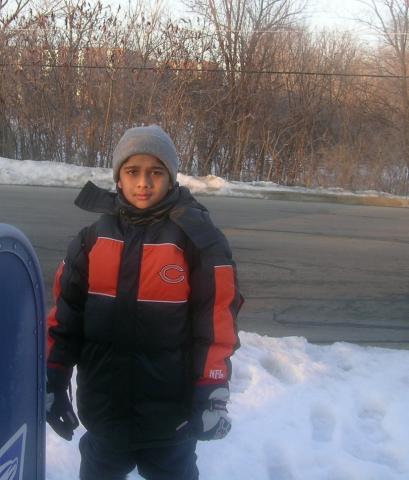 
Ok, hi guys my name is Chaitanya Wagh, I go by a lot of nicknames: Chaitu, Chaitu Chan, Chaitu Chai, some of my nicknames. I am Indian, my religion is Hinduism, I am 20 years old, I was born in India, Akola, it’s a city in Maharashtra from the state where I’m from. I grew up in Mumbai, which is a huge city in India. I am currently a student at the University of Illinois at Chicago, I’m majoring Biochemistry and some of my favorite hobbies are to play guitar, I love to go to car auto shows, I love playing basketball and I’m not a very good cook so working on that.

Ok, so how old were you when you came to the U.S.?

I was around nine when I came over to the U.S.

Ok and do you know why your parents decided to come?

Well, my dad, he was working at ICICI, a bank, it’s like a big bank in India, and they offered him a job to come over here to work and he always wanted to work in the U.S. so he took us in 2004 and yeah.

Ok so, do you remember like, what you felt once your dad told you guys?

Yeah, that you were coming to the U.S.

Well, to be honest I don’t exactly remember my dad personally telling me, but I remember coming home from school one day and, my mom was standing by the washing machine talking to my dad and I heard like “America” and “the U.S.” and like “Chicago” and I didn`t know what Chicago was, I knew U.S. and I was like “oh what’s going on, this talk about U.S. and America” and I remember my mom telling me later of she got off the call there is like a possibility we will be leaving in a few days to go to the US and I was like “what? A few days? I mean, I haven’t told up all my friends”…

Yeah, a few days. So, I was pretty like all urgent, but, it’s pretty crazy, yeah.

Ok so, and how was your first day here?

Oh first day? That was pretty interesting. I remember what I ate on my first day, it was Pringles and I liked Pringles, yeah. [Laughs]

So you’ve never had Pringles before?

No, well yeah, I had Lays or like in India before but Pringles, that’s some really good chips. And I’ve always liked Pringles ever since then. I came, I landed over here and, I was just wearing a sweater, it was what like January or something so it was really cold. But the funny thing is when I stepped out it was ‘kinda’ snowy and I’ve never seen snow before and like there were like flakes everywhere and suddenly I started seeing like breath coming out of my mouth and I was like “oh look, I’m smoking or something”. I don’t know it was like “oh it’s so cool” because you know I come from a tropic humid place, you never see this stuff. Yeah so, we got into a taxi, and then I remember leaving at a hotel that night, so we’ve been to a hotel and stuff. Yeah so it was very surreal, like just the people, accent, the smell, there was no pollution, I couldn’t smell pollution, you know I was ‘kinda’ used to it, in Mumbai is very polluted. I don’t know everything was so weird like the cars were different, I’m a big car guy, so I was like “oh I haven’t seen these cars, they are so big”. There was like people you know, were just like “hi”, they were very nice people too you know, they were being kind and everything, so just too much, overwhelming.

I’ve been in the U.S. now… it’s been… it’s been like yeah, eleven years now so, I won’t say I am American, I mean, though I have taken on some American characteristics, but at heart I’m still like purely Indian, so I’ll stick with that.