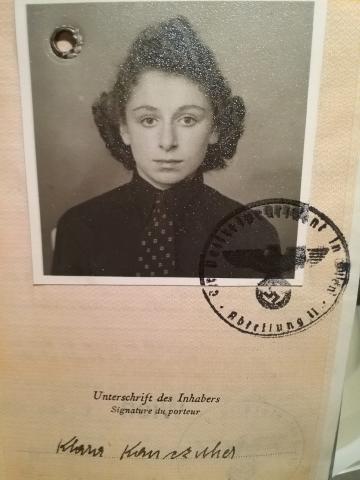 
Me: You can hear me alright?
Claire: Yeah okay.
Me: Okay, cool sorry about that. I know there can be a lot of technicals.
Claire: Well you know I’m glad Steven was here because when you’re talking to me you’re talking Chinese.

That’s my great aunt Claire. She lives down the hall from my grandpa in a jewish retiree complex in Florida. Her apartment is bleached white — carpet, cabinets, walls and all. Everything except her paintings. At 93 she still makes time to paint in the foyer of her apartment. She stencils geometric patterns, landscapes, and smiling suns for herself and family members.

You may have heard Claire’s accent in our phone call. She was born in Vienna, Austria. She immigrated to the US almost eight decades ago after Hitler’s troops invaded on March 12 1938.

Claire: We lived there a long time while Hitler was there. That was not easy. And then they came and took our apartment also. There was no questions. You couldn’t go any place. You know.

Her family moved into another apartment near relatives. There was a storage unit on the top floor her father hid in during visits from officials. They would have sent him to a concentration camp had they found him.

Claire: I’ll never forget when once they came into the apartment to look for papa. It was a very tiny apartment. So they went through my dolls. To my dolls. My only dolls. I had my paper dolls. You know.

Claire had always been the creative one in the family.

Claire: I’ll never forget the first day that I got there, before I even got to the door there were on the whole block it said no jewish people allowed. We used to go to a park and on each bench it said jews are not allowed to sit her. I mean it was just everything jews.

Claire’s family made plans to move to the US amidst the persecution. They were lucky. Years before her mother had registered the family with the Hebrew Aid Immigrant Society, an organization that helped jewish people relocate to the United States. Her friends were not as fortunate.

Claire and her family boarded a train due for Aachen Germany one morning in 1939. From there they took another train to Belgium where after five weeks of waiting they’d board a Holland-American ship to New York. Until the last minute they worried they wouldn’t make it. Claire’s older sister Betty had the chicken pox. Her father had gotten into a scuffle on the train.

Claire: We were not sure we’d be able to leave. And then when we finally made it out to the train and it was driving a little bit we see the sign you’re entering Belgium now that’s when my father started talking and we all felt… I felt like I had something on my chest all the time and suddenly it fell down.

In the US Claire’s family settled in a jewish immigrant enclave in Williamsburg, Brooklyn. Later on, in 1983, she moved to Florida with her husband. She’s visited Austria more than a dozen times since.

Claire: It was wonderful going back, but I could never ever live there. Once you live in the US you don’t want to live anyplace else, at least that’s what we felt. And I still do.

For the Seattle Globalist and the First Days Project, I’m Max Wasserman.