"Then age 10 I was took by force by army to go to war so I'm a child war soldier. I consider myself number one lucky guy because I see so many kids died in the war and the refugee’s camps." 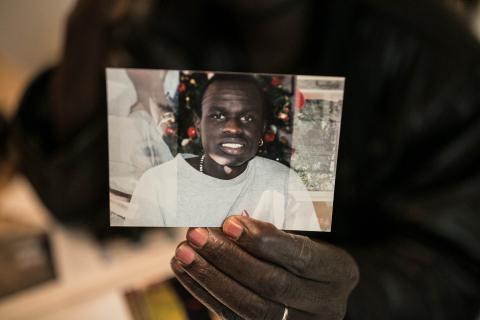 
When Daniel Machar came to the United States from South Sudan, he expected the streets to be made of gold and for money to grow on trees. Much to his disdain, this was not the case.

However, 10 years later, Machar considers himself lucky to be alive and living in the United States. He earns a living by giving back and serving those with disabilities.


“My name is Daniel Machar, I came from East Africa South Sudan. I've been here for a while, over 10 years.

Most of my life I raised myself you know, my mom died, I never know about how my mom look like, she died when I was a little baby. Then age 10 I was took by force by army to go to war so I'm a child war soldier. I consider myself number one lucky guy because I see so many kids died in the war and the refugee’s camps.

The first place I slept was near a beach by Martin Luther King, we were at this apartment and there were like seven guys from my country. Then I woke up in the morning and I said like “no that can’t be America, the road built by gold and then I went to the fridge and there’s nothing to drink and no food and I was like what!”

So when I get to use to this place and then I see this opportunity in America and to me I'm so blessed to be here even though I'm not where I want to be you know I’m blessed to be in the United States. That’s why I like to work with people with disabilities because I wanna give back. I mean I should be dead years ago but right now I’m here and a lot of opportunity can happen you know.

So my dream some day maybe five, six years from now, if I find some money because right now I’m borrowing and doing some stuff, my dream is to build a school here in my village.”