First Days Project
My name is Deepak Singh.
"It reminded me of a scene from some Hollywood movie where a newcomer in New York is gaping at advertisements covering the whole length of a building." 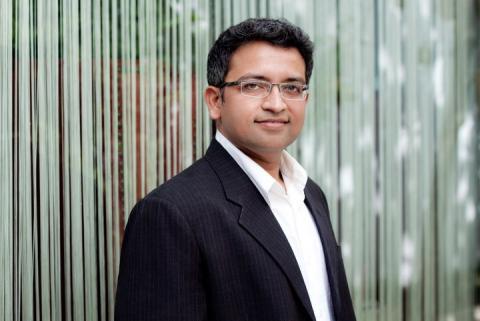 When I came out of the Dulles airport in Washington, DC, I realized that I hadn’t inhaled fresh air in the last twenty-four hours—I had spent seventeen hours inside the plane, and seven hours inside the airport in Vienna. American air felt crisp and fresh, I took a deep breath and filled my lungs with it. At four in the afternoon the sun was not at its strongest; there was a nip in the air. Twenty-four hours ago, at eleven o'clock at night, outside Indira Gandhi International airport in New Delhi, the air had felt heavy with fumes, and the climate, muggy.

Holly, my wife, had driven her Oldsmobile sedan—a very large, four-door American car—from Charlottesville. As we pushed the luggage cart out of the airport, I saw a sea of cars parked in front of us—Toyotas, Hondas, Fords, BMWs, Mercedes, Chevrolets, and many more. After we walked through the maze of vehicles for a while, she asked me to find her car among the thousand other vehicles in the parking lot. She had shown me some pictures of her car on the internet, but that was not enough for me to tell which one was hers.

She popped the trunk of the car open with her remote control to give me a clue. I walked to the car and was amazed to see the massive trunk, which swallowed my two suitcases and a handbag, and still had room for a human being to fit in it. The interior of the car was big enough to seat at least eight people. The doors of the car were at least eight inches thick and there was twice as much leg room as I had on the plane. Wondering why anyone would need such a huge car, especially when he or she was the only person using it, I questioned my wife about the size of the vehicle. “My grandparents want us to be safe,” she explained.

After we got settled in the car, she handed me a sheet of paper which said, ‘MapQuest Directions’ at the top. “I need your help with directions to get out of here,” she said. I could not understand what “Take the ramp toward I-495/Washington/VA-28/US-50/VA-7/Sterling/Centreville” meant. I asked, “How is this supposed to help you get out of here?” She replied, “Just read it to me,” as she pulled on to a four-lane road. I started to get the feeling that my wife was acting differently than she did in India. She sounded authoritative. In India, I drove her everywhere on the back of my scooter and made most of the day-to-day decisions. This was the first time I was the passenger and she was sitting in the driver’s seat.

I kept reading whatever was there on the sheet, without making any sense of the combination of numbers and letters like I-495, VA-7, US-50, etc. Somehow, those things made sense to her. Every time she had to change lanes she would turn back—as if she wanted to jump into the back seat—to see whether the road was clear. It was amazing. I hadn’t seen anyone looking back while they drove.

As we went along, we were often surrounded on both sides by huge trucks with signs that said WAL-MART, FED EX and MCDONALDS, etc. And, it would be like that for quite a distance as the trucks were—at least they seemed like—a mile long. It was like driving between two gigantic billboards with American advertisements.

It reminded me of a scene from some Hollywood movie where a newcomer in New York is gaping at advertisements covering the whole length of a building. Between reading directions from the sheet to my wife and obeying her other orders—pass me the water, change the CD—I watched us go under several flyovers that seemed like curled up spaghetti in the sky. Somewhere along the way I fell asleep and started dreaming about being in America and people yelling at me in very obscene language. I was shortly woken up to find myself at a gas station that was painted red and had Sheetz written all over it. Our car was parked next to a red convertible and my wife was filling up the tank, holding the nozzle in her hands.

I shook my head to regain my alertness. The red car parked next to us had loud and strange music playing.

There was a guy sitting in the passenger’s side of the car and another one filling up the tank. The person inside the car was throwing his both hands up in the air as if he was giving someone a massage; he had his head tilted at a forty-five degree angle, and moved it to the music’s deep bass—lowering it and then raising, lowering it and then raising it—in a rhythmic fashion. As the song progressed it picked up speed, and so did the head and hand motions of the person; he poked his hands in the air and bobbled his head with more intensity, as if he and the music were one. He also lip-synced the song, biting his lower lip every two seconds, making an angry face.

My half-awake mind found the song disturbing. Holly filled the gas tank and pushed some buttons on the machine to get a receipt. She asked me if I wanted to use the restroom inside the store. I said yes and followed her.

Inside, we were greeted by a happy-looking old woman who was wearing a blue shirt with lots of round clip-on buttons that said, “Employee of the month,” “Customer first,” and “Sheetz.” The store appeared to be a very lively place, and it had nice music playing everywhere. It did not have the same kind of lyrics as the red car outside. I picked up a bottle of water, and went to one of the cashiers to pay. The lady smiled at me and asked, “How ya doin’ today?” I said, “I am doing fine.” I thought it was really nice of her to ask even though I didn’t know her, but wondered why she added “today” at the end of her sentence—it was the first time I had seen her. I said, “I have just arrived from India, though.” She cocked one eyebrow and said, “Long way away from home, arentcha?” I said, “Indeed.” As I walked out of the line, I heard her say, “How ya doin’ today?” to the next person, and before I left the store she asked that question of several more people. I wondered why she didn’t care to ask people if they had been well the day before or a week before.

I kept awake for the rest of the journey.