First Days Project
My name is Marinelle Rojo.
"At that time, I had no idea what was going on. All I knew was that I felt small." 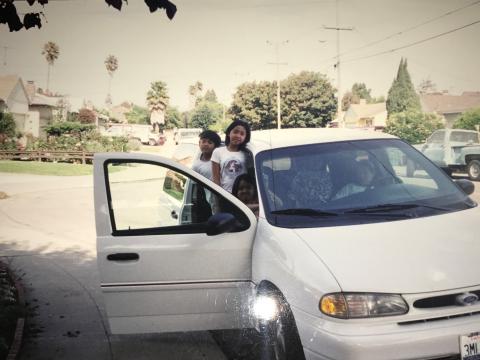 As only being 5 years old leaving the Philippines, I had no idea what was bound to happen. I didn't know why my aunts, uncles, grandparents, and friends were crying. I remember telling them that I'll be back tomorrow, as if I was only going for a trip to the mall.

Entering the airplane I was in a state of confusion, but all I knew was that I wanted to go to sleep. Few hours or so later, I woke up to my mom ordering food for her, my dad, and 4 of her kids. I was also seated next to my brother who kept pushing me next to the window scaring me saying that I would fall off the plane. At that time, I had no idea what was going on. All I knew was that I felt small. All I saw was water and a bunch of square lands. My dad's voice echoing in my head "We are going to the land of opportunities."

Reaching SFO was a blur. I remember meeting a lady who my mom told me was my grandmother. I was confused though because I just saw my grandmother a couple of hours ago, and that wasn't her. My family was guided to a white van where I sat, what seemed to be hours, to a place I did not know. When I reached to what was going to be my house, all I could think of was how spacious the houses were and how each one were so nice, and clean. But what shook me the most was how there was no neighbors in sight, it was so quiet and peaceful I could almost hear a pin drop to the floor. But what I remember the most, and what I still remember now after 15 years, was stepping out of the van and smelling the air for the first time. The air smelled so good, it was so clean and fresh.

Not much happened on the first day when my family got to America. My grandma settled us in, showing us where our room was. She also showed my siblings and me her snack wall, where she built it just for us. When I saw it, I remember being in shock. I always thought those food were luxurious and we only had them on special occasions. I spent the first day of America drinking orange soda until I threw it up.