"It was not a very happy day for me, because I had wanted to remain in the UK and attend Guy’s Hospital Medical School, which was a place I had wanted to go to ever since I was ten – I wanted to be a doctor like my dad." 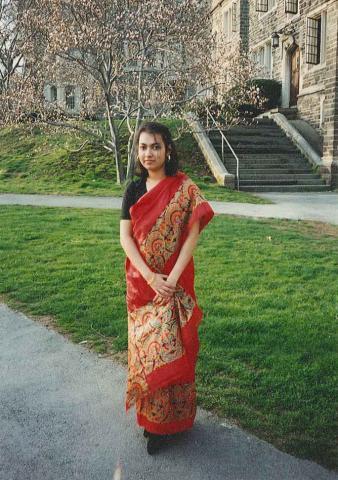 
My first day in the States I think starts the same way as it does for many immigrants – in JFK airport [laughs]. So, I arrived in the country with my dad and it was to attend Princeton, for undergrad. And it was officially an occasion of joy because I’d gotten into a very good university, with a scholarship that covered two-thirds of all my expenses. It was not a very happy day for me, because I had wanted to remain in the UK and attend Guy’s Hospital Medical School, which was a place I had wanted to go to ever since I was ten – I wanted to be a doctor like my dad. And I had actually gotten into Guy’s, but I was basically made by my parents to give that up and come to the States. So, very sort of unusual, opposite feelings [from] a lot of people, other people in my situation.

So, I just remember JFK being really crowded, and of course we were in the foreigners’ line, which was ten times as long [laughs] as every other line there. And just a fuzzy memory of finally getting through immigration and meeting my uncle by marriage, who had driven four hours from upstate New York to come pick me up and drive me back to his home, where we’d be staying for a while. And I think one of my mamas – one of my mom’s brothers – was there as well; a more vague memory there, but I do think, basically, two uncles had come a long way to meet us and pick us up. And then, yeah, we just got onto the, like, Route 17 and drove through upstate New York.

And that’s kind of my first day. I think I was fighting with my dad. That day and a couple other days. I was trying the silent treatment. I was trying to express my unhappiness, and he was – when my dad didn’t want to deal with something, he just didn’t talk back, he just avoided things. I think my aunt’s mother-in-law, and she was gossipy type, like lots of older Bangladeshi ladies are, and apparently she was sighted on the steps, straining her ears trying to hear what exactly was the problem between me and my dad.

A few days after I arrived in the States, another uncle of mine showed up and drove me and my dad to Princeton. And, you know, stuck around for a bit, moved me in, and left. So it was just me and my dad in my room for a couple of days, and it was really hard because there’s a lot of things new students have to do and most people are smiling and happily doing them, but I was actually miserable [laughs] in the photo they took of my Princeton ID – and I had that sad face on my ID for all four years [laughs]. I don’t know why I never thought about going in and updating it when I was happier, but I never did.

There was still this anger towards my dad and this kinda, still, conflict and tension. And as per his usual [behavior], one day he just kind of walked out and just left my room. I just remembered that he was headed back to Bangladesh in a couple of days and that I wouldn’t see him for at least a year. And I felt sorry for what I was trying to do to him, so I actually left my room and found him near the front gate and I said, “You know, it’s okay. It will be okay. Let’s just go back and hang out.” And looking back, after all these years, thinking about it – especially now that he’s dead – Princeton did turn out to be a good experience. My best friends in the world are friends I made at Princeton. I’m really glad that I said what I did to him on that day, that even at that young age I had a little bit of foresight to make my peace with him – otherwise it would have been a lasting regret.