"So I remember just getting really excited, telling all of my classmates that I was going to leave… and somehow not being very sad about that!" 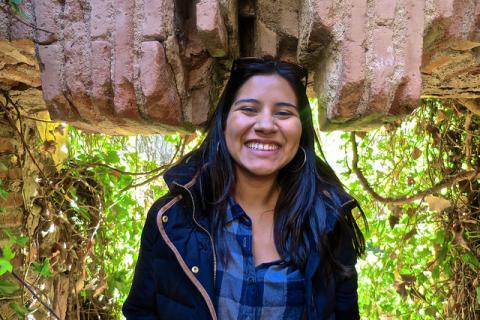 
My name is Moravia de la O, I moved to the U.S. when I was 10 years old in December of 1998 from Saltillo, Mexico to Davis, California.

I was really excited, it just seemed like a really big adventure and I didn’t really know what to expect. When you are a kid you kinda don’t really think about how challenging it can be, so it just seems very exciting.

Yeah, I remember a lot of the moving because we had to pack everything, go through all of our stuff, and a lot of my mom’s siblings who lived not that far from where we were living, they came to help us do that. So I remember just getting really excited, telling all of my classmates that I was going to leave…and somehow not being very sad about that! I was just excited overall.

We had to fly from Monterey, which is a big city in northern Mexico. But I remember we spent the night at a hotel and I think the World Series was on, like the last day of the World Series? Some sporting event. I really remember that, that was a vivid memory.

I think maybe one of the first things we ate was a burger and we were really excited about that, like, eating a burger in the States! Um, I think one of the first things we did was go visit my grandparents, who I hadn’t really seen in a long time. And the just yeah, just seeing a lot of my Dad’s side of the family who we hadn’t really seen or spent much time with so it was a lot of family time the first day at least.

I really fascinated by my classmates’ lives, it seemed very lax to me compared to elementary school in Mexico, just a lot more informal. I hadn’t really thought about not speaking English, or that that would be a challenge. And then I guess the only other thing I thought was surprising was that there weren’t that many Latinos or Mexican kids in my school. Yeah, there weren’t a lot of people that spoke Spanish.

It was a very exciting moment. I don’t think I fully understood, like, the implications of what a move to the U.S. would mean, or the permanence of it.