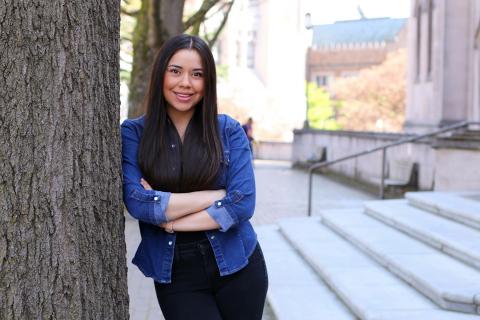 
Dulce Sigüenza arrived in the United States from Mexico when she was 11 years old. Her parents brought her from Oaxaca, Mexico to Seattle, Washington for better educational opportunity. In Mexico, America has a reputation of being a land of opportunity. Even as an undocumented student, she was able to take advantage of those opportunities. By applying to Deferred Action for Childhood Arrivals (DACA), she was able to work, and with the Real Hope Act she was able to receive in-state tuition rates for college. Through hard work, she received scholarships to attend and eventually graduate from the University of Washington with a degree in psychology. She now works for the Northwest Immigrant Rights Project (NWIRP), where she can work to protect the rights of immigrants like herself.

Dulce shares the story about her first day in the United States. She reflects on her experience of trying to get chocolate on her ice cream at Dairy Queen. For a child, ordering ice cream seems innocent and simple, but coming to a new country without knowing the language made this seemingly simple task surprisingly difficult. Stories like this show Dulce overcoming the language barrier, and many more struggles, to make the most of the opportunities available to her in America. Still, Dulce remembers having mixed feelings on that first day. It wasn’t easy to be separated from her brothers at such a young age. In fact, it made her feel insecure, sad and even scared. At the same time, the clean city, green nature and water all around make her feel at peace and are some of her favorite things about living in Washington.


My name is Dulce Siguenza and I am originally from Mexico, specifically the state of Oaxaca.

We first came to America, and by we I mean my family and I, in 2006. I was excited and kind of wanted to see what the whole excitement was about. But I was also very sad and insecure a bit because I grew up with my brothers, two older brothers that I have. They are nine and eleven years older than me. And by the time that my parents decided to move to the U.S. with me, they decided that my brothers would stay because they were already in college. And it would just be easier for them to keep having a stable college experience and not have to move and learn the language. But for me it was a little different because I was so young. But not having them with me made me very insecure for a bit of time, and also kind of sad and missing them a lot. But scared as well because I didn’t know how things were going to turn out.

To celebrate our arrival, we went to a Dairy Queen. They had the option of, like, adding chocolate to your ice cream or this strawberry flavor or something like that. And I really wanted the chocolate but I didn’t know how to tell the lady that was helping us get our food that I wanted chocolate because I didn’t know how to order things, I didn’t know the language. So that is still memorable to me because now I can speak English and communicate. So it’s a good thought, like a good memory that I have. That I couldn’t speak english and now I do, fluently.