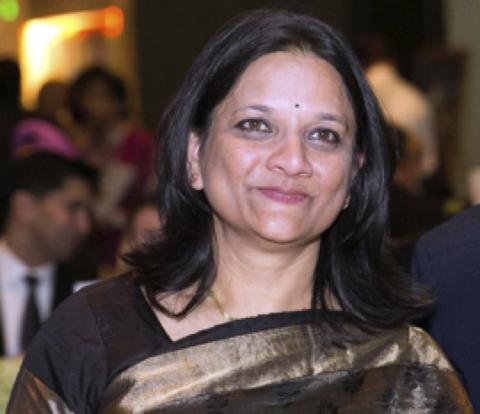 
Nirmala Garimella is the co-founder of Lokvani, a community media website for Indian Americans in New England and Co-Founder of Circle of Hope at AIF. She also served as a town meeting member in her previous hometown of Lexington, MA and currently serves on the Board of Directors at Vision-Aid Inc, which serves the visually impaired. She has lived in the US for 25 years and has embraced the concept of being American.

I was living in a city called Hyderabad, which is in the south of India. And so that is where I came from before I came into this country.

What caused you to migrate from your home country to the US?
I would call it Serendipity. We had no plans to come here but my husband received a telegram from Bangalore quite surprisingly to train for a new software called SAP. That training offered him an opportunity to come to the US. I was ready for a new adventure to experience a different kind of life. So our migration was not really planned.

I was 32 years old; I was married, and I had two children.

What year and where (city and state) did you arrive in the United States?
We landed in JFK Airport in New York City on February 28, 1994. We came in on an Air India flight from Hyderabad to Bombay and from Bombay to JFK.

So we landed here in the evening. And I remember, first of all, we were really tired and exhausted as it was the first time we had been on such a long flight. We were actually looking forward to just going to my brother in law’s home, relax for a bit, and take a shower. But we were totally overwhelmed. And we were so excited about landing in New York City because I had always read about New York City in the books and about America. To be actually landing in a fabled place was a very exciting feeling. And I think when we were driving down from the airport, to my brother in law's place who lived in Manhattan, I was just so fascinated seeing all those tall skyscrapers and so many bridges and lots of people. It is a very different kind of an experience.

What was the hardest thing about being an immigrant?

I think the hardest part of being an immigrant was the weather and adapting to a new culture. We came from a hot country. You never knew what cold really meant in India. And the winter here, we were told it was cold, but we didn't even own the proper clothing when we came here because in Hyderabad, you will barely find a shop that would sell you warm clothing. So we got some very flimsy coats. We came here and I remember the first day I landed, we looked out and the pilot was saying that it's zero degrees centigrade. And we were baffled - we had never felt such cold weather. And we looked out, and it was all bright and sunny and then, the doors opened up and there was this blast of really cold air. We had never experienced such kind of cold ever in our lives. And then there was this bright snow and the sun was shining on the snow and it was so surreal! We were forced to get used to that because the year we landed, we had almost 23 snowstorms in Boston. We came from New York in three weeks to settle down here in Boston. And that was the hardest part I think. Just getting used to this kind of weather and then, of course navigating. Because we didn't have a car to go, we lived in the suburbs. We had to find grocery stores within walking distance, you know, walking with coats, we came with $200 and two suitcases. So it was very, very hard to know how you navigate a very different life in a strange country.

We have always had this notion about America being the free world and the new world, where every immigrant comes and realizes the American dream as long as they work hard. And I think over the years now, we've been here more than 25 years, I realized that much of it is really true even though our country does go through ups and downs, whether it's in politics or whether it's in other things. But truly this country represents the whole belief that hard work and determination can get you anywhere. All immigrants are welcomed here - everybody's an immigrant in America. So I think the ability to just grow as an individual with freedom to be your true self. You can do the things you want, you can dress the way you want. Nobody is telling you every day how to live your life or giving you advice. That's the best thing about being an immigrant.