"I mean, I had, you know, money and my passport and laundry, enough, you know, underwear." 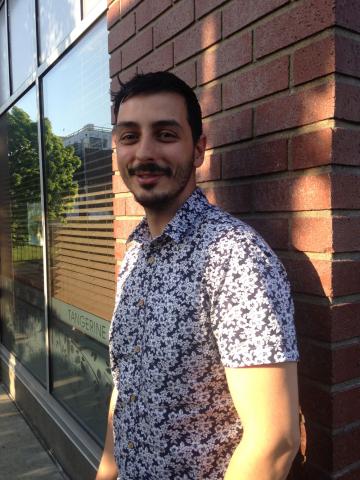 
Dušan Sretenović first came over to the states from Serbia as part of a work and travel program. From his bag being lost, to being put in the “smoking room” of the hostel, his first day in Seattle wasn’t perfect.

However, Sretenovic was looking forward to seeing the country he has learned so much about through movies, books and tv shows. The work and travel program was a perfect way for him to see what American life was like.


My name is Dušan Sretenović.

And where did you immigrate from, Dušan?

And when was this?

Uh, this was in 2007. Early June. I got here June 1st. Initially it was a program called work and travel, which brings students from all over the world to the U.S. to exactly do that, work and travel. You get a four month work permit and an extra month which you are not allowed to work but you can like travel around the U.S. and experience the culture and everything really…I don’t think I can remember the actual like feelings and stuff I think we were sort of focused at you know, collecting our stuff and like getting to our destination, which, my bag was lost…It was a little scary. I mean, I had, you know, money and my passport and laundry, enough, you know, underwear. That was important. Um, yeah I had the important things but it was just kind of scary to try and organize how to get my bag back…I wanted to see what all the fuss was about and why like this was the greatest country in the world and I mean it was definitely not the way like I said the movies showed it to be but it wasn’t really a bad experience, it was just different. Not everybody had the, you know, a white picket fence, a labrador, and the perfect family but you know, I meant like, I thought that, I don’t know what I thought.