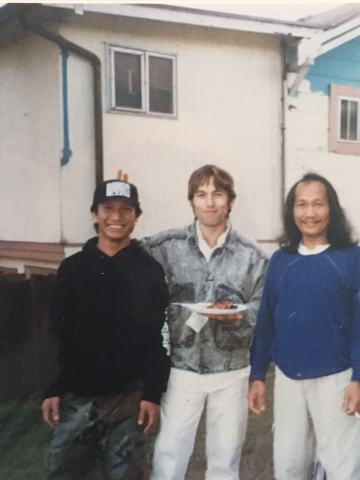 
Edwin Villanueva was the last person from his family to move to the US because he was intent on finishing high school in his hometown of Manila. His parents decided it was time for him to join the stateside after he was stabbed seven times over a game of pool. His attackers stabbed him three times in the back and four times in the arms. After he recovered from surgery, he immediately left to join his family in Los Angeles.

Edwin had a hard time meeting people and spent most of his first month with is family adjusting to the new culture of LA. He landed a job at a Bullwinkle’s Family Fun Center and worked his way up the restaurant ladder until he was a full-time line cook. The Villanueva family owned restaurants and bakery back in Manila, so Edwin was no stranger to the kitchen. Edwin continued working a chef all over the west coast and currently lives in U District with his massive black Mastiff named Oggie.


My name is Edwin Villanueva and I left the Philippines back in 1990. I arrived at LAX on May 13th. I was born and raised in the Philippines; lived there for almost 17 years. A month before my 18th birthday I was moving to LA because I got stabbed 26 years ago, just before my 18th birthday. My parents pretty much decided that it would be good for me to move here as soon as everything was done with the surgery.

My mom already lived here and all my brothers and sisters lived in California. My dad lived in New York, so I was basically the last one to leave the country because I wanted to finish up with high school and stay there for a couple more years before I moved here.

Back in the Philippines, you could just wear what you wanted to wear, but at that time in LA, there were a lot of gangs. Basically you can’t wear a loose white t-shirt and jeans and white shoes because those were somebodies colors. California is pretty big; Manila is a good-sized city but everything is pretty close. Where I grew up, you knew everybody in your neighborhood.

When I first moved here, for the first month until I started working, I didn’t start making friends until I started going to work. I started as a dishwasher. After a month, the guy was like “well, do you know how to cook?” Oh yeah, I grew up with my family having a restaurants and a bakery. A co uple months after that they moved me to pizza guy because I knew how to make dough. Then I just worked my way up the line.

There are so many things you can do here if you just want to work on it. It’s there for you. If you want to do something, you can just work hard and you’ll get there. There’s not so much politics. It’s not like that back in the Philippines where it doesn’t matter how good you are. The person who knows the owner, he’s still the one promoted before you because it’s just the way it goes there.