"And when he met us at the port, I ran up to him and looked at him and I thought: no, this is not my uncle!" 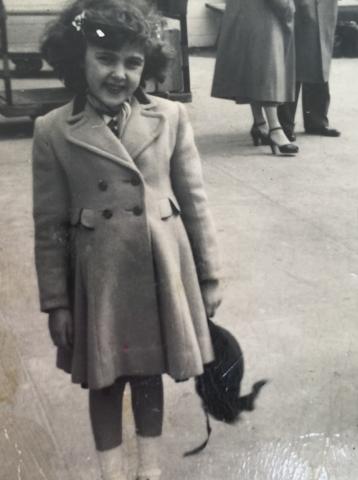 
I came to New York when I was 5 years old with my parents. I was born in England, in London, and my parents decided they would move to New York because of all the stories they heard about the streets being lined with gold. They were very, very excited about opportunities that they would have in America that they didn’t have in England.

The way to travel those days was by the Queen Mary, a huge, huge ocean liner. And...I don’t remember very much of it except for maybe a birthday party on the ship, and the elevators. I had never seen an elevator living in England! We lived in a two story apartment, so it was very exciting for me to go up and down the elevators in the ship. And I remember doing that many many times, just going up and down, I found that exciting.

When we went...when we got to New York, I was very excited about seeing my uncle because I had seen pictures of him. And he was my favorite uncle and he was the guy who was going to make everything wonderful in America. And he had a mustache on the pictures. And when he met us at the port, I ran up to him and looked at him and I thought: no, this is not my uncle! And I cried because he didn’t have a mustache [laughs]. And I was only five so I guess that was important to me.

Well my uncle ended up taking us to our apartment, which was in a really, really terrible neighborhood in New York, we didn’t have a lot of money. So it was important that my uncle find something that we could afford. So I just remember that old apartment with the old walls and a few little roaches crawling along the hallway.

Let’s see, what else do I remember? Oh yeah! I remember looking at the streets [chuckles] and I was very disappointed because they were not lined with gold. They were kind of dirty, and they had garbage on them. But, at the time...it bothered me, but then I realized that it really didn’t matter [laughs]. The opportunities were still there for me and my…