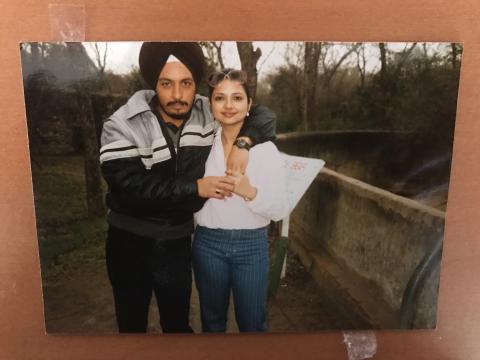 Hi, I am Manpreet Dhaliwal and I am an immigrant from Punjab, India. I came to America on July 3rd, 1987. I was 22 at the time and recently married. I was married at the age of 21 from a man in America. As I was coming home from college one day, my parents told me I was engaged to a man that lives in America. I thought it was a joke at first but then I realized they were serious. I had no choice but I had always dreamed about living in America and moving there at an older age. I was depressed that I had to get married at such a young age but all of my friends were getting married at that age as well. I didn't think too much of the man I was marrying but more of the fact that I was going to America for the first time. I always thought I could live the "American Dream." The man I was marrying was 6 years older than me but my parents did not care, they only saw that he came from a wealthy and stable family. I was still young and attending college at the time. I did not know who I was marrying, what he does for a living or anything about his past. Yet, I had no option but to marry him. We got married on February 2nd, 1986 and after the wedding, I went back to school and my new husband went back to America. It would take a while for me to move there because of the VISA hassle and so on. As 1 year passed, I received my degree at Punjab University in Bachelor's of Arts in Geography. My husband came back and we left together to go to America. We arrived in America on July 3rd, 1987. I had been waiting for this day to come when I was a little girl as all the grown ups around me talked about how great America is. I had many hopes and dreams when I was young to move to America, but I never knew it was going to be like the situation I was in. As we landed, I could already see new sites and new smells. As we arrived in California, I took it all in and I realized how much my life was going to change before my eyes. I asked my husband if he can show me around and if we can try "American food." I had my first American burger. I was beyond excited and wanted to see everything in one day. We settled down in the house he was staying in Pittsburgh, California with all of his family members. I still remember it as clear as ever. He took me around San Francisco and we went sight seeing, and then realized how bad our jet lag was. Since the next day was July 4th, I got to learn a lot about the history of America and also got to celebrate as well. As weeks passed, I started my first job at Burger King and it was an interesting turn of events. After a while, my husband and I decided to move into a house of our own in June of 1988. As time went on, I got a government job and life started to become more stressful in America compared to India. I still believed it was a better choice to stay in America that it will give better opportunities for my future family in the long run.