First Days Project
My name is Ethel Rohan.
"Such fondness in his voice, and I had never ever heard that before. Ever. My entire life." 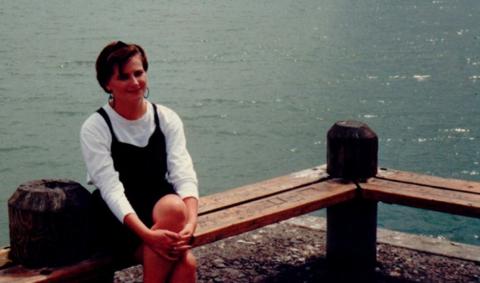 
Ethel Rohan boarded a plane in Dublin in 1990, bound for California.

She was 22 then and had just quit a prestigious job at a bank to restart her life in San Francisco. Good friends had moved out there, found work as nannies, had rich social lives and new adventures. Rohan found it all intriguing. But the United States also meant a way out.

Rohan grew up in a working-class North Dublin neighborhood, with rows of identical terraced houses and “women standing at the front door, talking over the fences, smoking their cigarettes. That kind of thing.”

There were also the “boot boys,” tough and edgy young men hanging around the corner shops. “In many ways, it was a frightening neighborhood. You really had to have street smarts," she says.

Rohan’s home life was also challenging. “My mother was very ill for many years. She was a paranoid schizophrenic, and I cared for her so much over the years,” Rohan says. “I felt that I’m going to end up getting married, I’m going to probably have four kids. I’m going to be stuck in this same place ... caring for my mother. It was all laid out.”

Once in San Francisco, joining up with her friends in the heavily Italian American and raucous North Beach neighborhood, Rohan remembers seeing strip clubs for the first time. “Totally new to me, with their neon lights and these very provocative women standing in doorways,” Rohan says.

There was also the ramped-up pace of life. "People spoke really fast and then you're trying to figure out everything at the same time," says Rohan. "Even though I speak English, there were a lot of new terms to me. You know, what's a 'cross street'? That was a completely unfamiliar term to me."

And the idea of just stopping someone to ask directions seemed tricky. "You're looking around and thinking, 'who looks like I can ask them?' Everybody's walking super fast and very purposeful-looking. Everyone seemed to know what they were doing. Of course, I'm sure that wasn't the case, but that's what it seemed like and I felt like I was clueless."

Feeling overwhelmed, and living alone for the first time in her life, Rohan also remembers those first pangs of homesickness. “I remember phoning home for the first time. We didn’t have a home phone. So my first year or two, I would phone my neighbor, and my parents would come in next door and talk to me,” Rohan says.

She still remembers her dad’s voice, saying “Ah, Ethel,” on the other line.

“Such fondness in his voice, and I had never ever heard that before. Ever. My entire life,” she says. “He never said it, that he missed me, but I heard it in his voice. It was the most precious thing.”