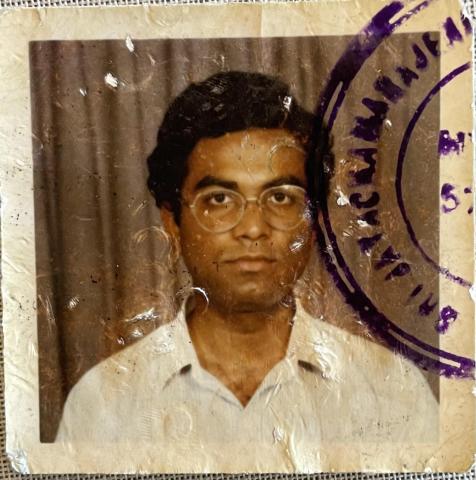 
My name is Giri. I came to the US in January of 1994, specifically to New York. I left New Delhi, India, to come to New York to study electrical Engineering, and get my Master's in electrical engineering at NYU. I was 23 years old when I got here, and I'm currently living in Brooklyn, New York. I've lived in New York City for the past 27 years.

I came here to go to graduate school; to do my Master's in electrical engineering at New York University’s, back then it was called a Polytechnic Institute, now called the NYU Tandon School of Engineering. I flew from Delhi airport; took a Lufthansa flight. It stopped over in Frankfurt, and arrived in JFK on, I believe it was January 7th, 1994. I remember it was right after there had been a big blizzard, so there was a lot of snow on the ground. When I got to the apartment, it was sometime around noon.

I was fortunate enough that my mother was already in the US and working at the UN. So my transition was perhaps not as stark as some of my friends who were going outside of India for the first time. I was very excited. I obviously knew quite a bit and I spent some time, the previous year in Munich, Germany, so I was familiar with a lot of the infrastructure that you don't quite witness when one grew up in India back in the 80s and 90s. But I was very excited to be in New York, which is clearly, back then and now even more so, the capital of the world in some ways. We lived in an apartment building that was very close to the UN; it was very close to the East River and it was a beautiful apartment so I was very excited to be there, very fortunate to have had the opportunity.

I think most people even now when they come to New York and take the ride from JFK into Manhattan coming out of the Midtown Tunnel or riding on what I now know as the Brooklyn-Queens Expressway, it’s the site of Manhattan from Queens; Brooklyn is so awe inspiring, and the size of the skyscrapers and just the landscape, which was quite different, obviously than what one had been used to at that point, and that was really awe inspiring.