"I had a hard life previously, and I refuse to let that happen again here." 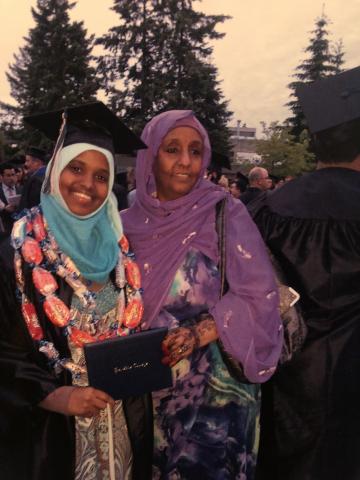 
Fadumo Mohamed is a single mother of 7 girls and a boy from Somalia. She moved to Saudi Arabia when she was married and lived there for 20 years. She later on moved to Syria to get sponsored to seek refuge in the U.S. through the United Nations. Fadumo and her family were brought to the U.S. by the UN.

I decided to tell my mother’s story without inserting myself. When we came to the U.S. I was 11 so I remember the details of our arrival but I wanted to focus on her story. Therefore, I will be translating her story in the third person point of view.

Her interview was conducted in Somali, her first language.


This is Fadumo Mohamed, a Somali immigrant and guardian of 7 girls.

She perceived America to be this big country, but she was greeted by Mobile’s small airport in Alabama. She described it as Africa. (laugh) Her image of America was, let’s just say, not Alabama. Maybe New York, San Francisco. Definitely not Alabama (Laugh)

Fadumo heard stories upon stories of murder, theft, and kidnapping in America . The thoughts of these happening to her daughters drove her into a panic attack and sleepless nights.

It was hard, she explained. Someone came picked them up from the airport and dropped them off to small house. But that was it. No one came back to check on them or help them settle in.

“Clip of Fadumo asking for sugar”

Fadumo had to go to her neighbour to ask for some sugar to make herself some tea. She knew a few English words and luckily, sugar was one of them.

Fadumo and her family arrived to the U.S. as a refugee in September of 2007.

Having to figure out everything out on their own, Fadumo was fed up! She wanted to go back home.

She said, “I had a hard life previously, and I refuse to let that happen again here.”