"We took pictures of everything! We were like two kids in a candy land." 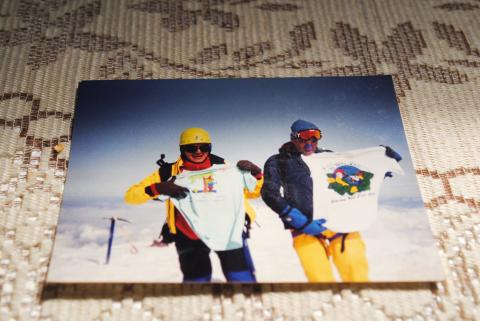 
My name is Gonzalo Tello Sanchez, I grew up in Mexico City. My very first time in the United States was in 1992 when I came to climb Mount Rainier with a friend of mine, his name was Pepe.

That was also for me and Pepe being in a foreign country, not only that I spoke just a little bit of English and my friend Pepe didn’t speak any English.

So for us, we were, we were nervous because we didn’t know we were getting into it, but also didn’t speak enough English. And the other thing that was our first time together to fly in a plane, so that was like these two Mexicans holding hands when we took off.

And, I mean, everything was different. We took pictures of everything! We were like two kids in a candy land. I even remember taking pictures of the gas pumps because we didn’t have those in Mexico.

And we got, we got lost several times but we found always our way around.

And we climbed Mt. Rainier in 1992, 4th of July. That was an experience because … Well my friend Pepe, he was a good climber; I had climbed the Mexican volcanos several times. In terms of equipment we had probably 50 percent of the equipment and I had to use … I borrowed a lot of equipment and my gaiters were Safeway plastic bags.

We were young, I was only 26 years old. So, we did, we did okay, we summit without a problem.