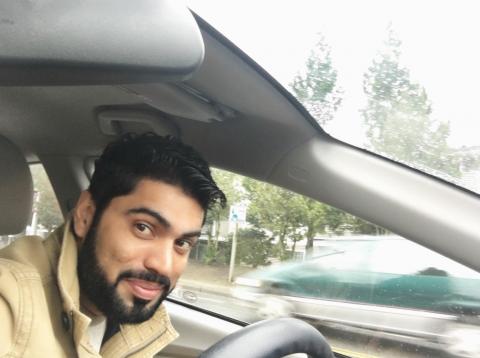 
Jawed Popal Azizi is from Kabul, Afghanistan; his friends call him Jay. When he was 15 he was recruited by the U.S. Departments of State and Defense, respectively, as a translator and interpreter for U.S. forces and diplomats during the two surges in Afghanistan during the Bush and Obama administrations. He actually got to meet General David Petraeus in a briefing.

Jay views that the overall situation in the Middle East is worsening, especially the War on Terror. According to Jay, not having a proper strategy to combat terror and insurgencies has made the situation in Afghanistan even worse post-9/11. As a moderate Muslim, this made his situation quite precarious as the Taliban and others brook no dissent. Thus as a result of working for the U.S. government, Jay had to flee his beloved home country in 2010 because the Taliban or other anti-American groups could have potentially kidnapped himself, his family, or worse. Without him in Afghanistan, the Taliban and others would leave his family alone.

Jay is currently attending the University of Washington in Seattle majoring in Political Science. Jay says he wants to return to Afghanistan someday to give back and help the country recover. Despite the election of Donald Trump to the presidency, as a Muslim he feels safe residing in the United States. He departed from Hamid Karzai International Airport in Kabul to Frankfurt Airport in Germany. From there to John F. Kennedy International Airport in New York City on November 22, 2010 finally landing at SeaTac International Airport. This is where we pick up Jay’s story in America.


I’m Jawed Azizi, I’m from Kabul, Afghanistan. Afghanistan is a mountainous region, you know, it is a mountainous country. So it is cold, it is cold; I had that preparation. I knew that the place I’m going is going to be cold, too. Obviously I’ve lived in a big city but when I landed, first thing I saw at JFK Airport was a rush. These people with a different system, culture. All these different smells, the freshness of the air, the environment. Cool and fresh breeze kind of feeling that hits your face like when you wake up in the morning. I took that as a sign that it’s the morning for me, to wake up and I have to make my day. I saw that as overall a metaphor for my life. Now it’s the morning, I woke up as an American. These were things I was telling myself. Hey, you made a decision. You have to adjust yourself to the new environment, people, and culture.

It was one of the coldest winters in Seattle history, this was back on November 22, 2010. The streets were jammed, it was snowing like hell, and the caseworker who was assigned to pick me up, never came to pick me up. So I was at SeaTac waiting for a ride when my ex-boss drove all the way from Pierce County through the bad weather, picked me up from the airport and took me to his house. It was cold, snowing, and icy. The roads were slippery but I’m glad I made it (laughs). I have friends and I pretty much just stick to the American culture.