"We thought it was amazing, but in reality it was a complete, you know, mess. It wasn’t really good." 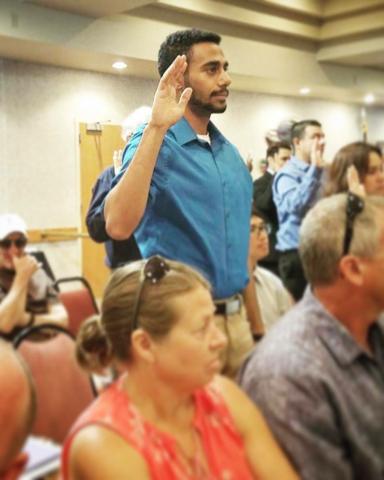 
Interviewer: Do I have your permission to record our conversation and upload it to myfirstdaysproject.org?
Hamza: Yes.

I: What is your name?
H: Hamza Elhabbal.

I: What country did you come from?
H: Egypt.

I: And then, what city did you come to in the US?
H: Brooklyn.

I: And then, where do you currently live?
H: Fayetteville [New York].

I: And so, like, what was your status when you were immigrating? Were you an immigrant, refugee?
H: Immigrant. Yeah, I had a green card. I was a permanent resident.

I: Ok. And then, what were your first days in the United States like?
H: It’s hard to put a word on it because, it’s like, it’s like, moving to a completely different world. We lived pretty well in Egypt. I mean, it was because my dad was here and he got paid in dollars and then he sent money back and it was a lot more money in Egypt so we lived pretty well and then when we came here, we moved to Bay Ridge and it was just like… We thought it was amazing, but in reality it was a complete, you know, mess. It wasn’t really good. Our entire house was a living room that merged into a kitchen that merged into a bedroom and that’s it. And the rent was ridiculous and the community was awful but we didn’t know any better and we thought it was amazing. So, when we first landed, it kinda didn’t hit me until, like, the first snow hit. It really didn’t hit me because we were around so many other Arabs so I didn’t really have to interact with people until the first snow hit and then my first day of school. That’s when it really was a shock to me like, oh, I actually have to adapt to this culture now.