"And the parks, and the freedom and security you guys have, and that feeling that you can be out late without having to go home with the fear that like, oh no it’s late, you know, people come out, you know." 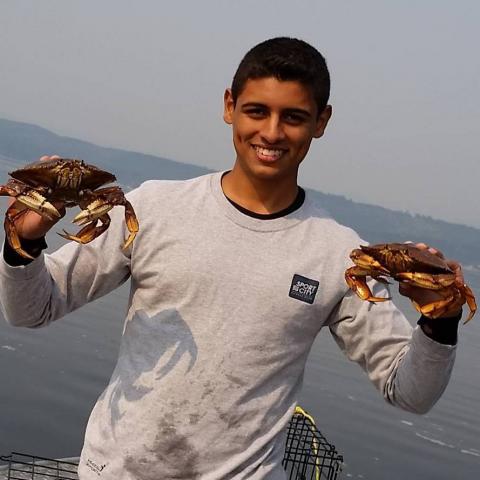 
Born in Oaxaca City, Mexico, Hectorinho Iturribarria (Hector) came to the United States when he was nine years old. With minimal education, his mother found it difficult to find work in Mexico. In hopes of better financial and educational opportunities Hector and his mother moved into his grandmother’s house in Shelton, Washington.

Hector remembers his first days at school, and how exciting it was to be in the country he had seen so much of in movies. The people were nice to him, he recalls, and actually took interest in how he was doing.

Able to find work and create a positive environment, Hector’s mother and grandmother still live in Shelton, while Hector lives in Seattle. He says he can only describe his family’s move to the states as a great experience.


Hector Eduardo Iturribarria Bazaldua, that’s full name. I’m from Oaxaca, Mexico. Born in the capital, Oaxaca. I came to the states in 2004, September 2004, and I think it was the 14th.

As kid, as a 9 year old, it was really just fun and interesting to come to America because you grow up with American movies, in Mexico and The Simpsons and just all of these American TV shows, and I came to America and I see the yellow busses and, you know, I started my first days in school and you guys have lockers and lunch room and cafeteria and all that and things that are different in Mexico, like we don’t have the yellow busses and all that stuff, so it is really fun see like I’m in a movie! People were really nice and just wanted to see how you’re doing and all that stuff, things like don’t really happen in Mexico.

My first days, I wasn’t in school yet. I just got to hang out at my grandma’s house and go to the dollar store. That was really interesting, just because, like, you can buy a certain item just for one dollar. That concept was really interesting. And the parks, and the freedom and security you guys have, and that feeling that you can be out late without having to go home with the fear that like, oh no it’s late, you know, people come out, you know. Sure it still happens here in America, but it’s not as bad. So you just feel so much carefree here than there.

Shelton was a really, really small town. I lived in Mexico City, and I went to Shelton and it was really small, surrounded by trees, so a lot of nature, water, right? You can actually swim in the lake; it’s not polluted. That was really nice to me.