"My entire childhood was spent in one of the seven UN camps for Bhutanese refugees. We came here because we are Bhutanese Nepalis and the Nepali government didn’t give us citizenship, so we came to the U.S.A. to work, get an education and have citizenship for the first time in our lives." 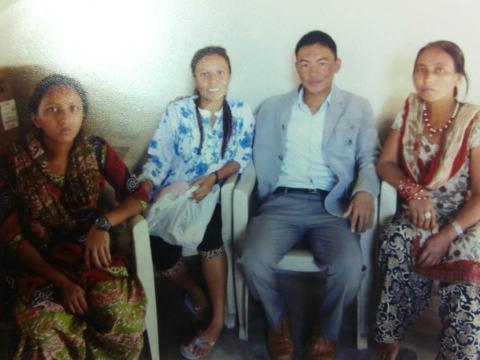 I came from Jhapa, in the east of Nepal. I had been there for 20 years. My entire childhood was spent in one of the seven UN camps for Bhutanese refugees. We came here because we are Bhutanese Nepalis and the Nepali government didn’t give us citizenship, so we came to the U.S.A. to work, get an education and have citizenship for the first time in our lives. I traveled with my mother and my older sister. From our camp to Kathmandu to Paris and New Jersey we were in a group of nearly 150 other refugees coming for resettlement in the U.S.

The very last thing I did in Nepal was talk to my friends—some of whom went to Australia, Canada and other cities in the U.S. after I left. Even still, some are waiting in the camps for third country resettlement. The most important things I brought are my education and my memories. There were so many good and bad things there that let me be grateful now that I am here.

We flew from Paris to New Jersey. In New Jersey, our flight to Saint Louis was cancelled. We cried a lot, because no one was looking after us to help us make our flight and we didn’t know what to do. After waiting for a short time, we got on another flight and finally made it to our destination, Saint Louis. When we arrived in Saint Louis’s Lambert Airport, the first thing I wanted was to meet my family. My uncle was supposed to be at the airport to receive the three of us, but because of catching another flight, no relatives were there. Again I was sad. A case worker from the International Institute, a refugee resettlement agency fetched us from the airport. Finally we went to our uncle’s house. After three years, we laughed and talked until 5 in the morning.

When we first came to Saint Louis, all the Nepali refugees were celebrating Dashai and Tihar. We went to the park our first Sunday. I was so happy and excited to see all those Nepali people. I never thought that we would meet in the United States. Since I came here from Nepal, I have realized a lot of things. When I first came, traveling was scary and I felt American people did not care for us. Now I know some American people are good and some people aren’t, just like all people. Nowadays I like to be friends with both Nepali and American people. At first speaking and understanding English here was difficult, though I had studied English in Nepal. Now I am a student and I’m very excited to get my first citizenship in my life. Even though I have to wait for three years, I already finished the citizenship book!