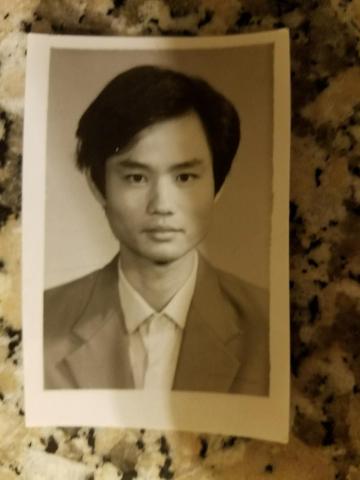 
Harry Shen is a Chinese American from Nanjing, China. He grew up during a difficult time while Chairman Mao was ruling China. He went through hardships such as being malnourished because it was often a struggle to have enough money for food, but was very sporty and athletic as a child and young adult. After graduating with a geography degree from Nanjing University, he worked for five years and then decided to pursue higher education. He came to the United States to go to graduate school at The University of Arizona. After graduating, he moved to Victoria, Texas for a while, then back to Tuscan Arizona, and then finally settled in Las Vegas, Nevada. Now 56 years old, Harry has found a home in the United States and appreciates the struggles he overcame.


My name is Harry Shen. I originally came from China. I left China and I came to the United States of America to pursue my post graduate education. Till this day, I still remember when I first arrived the USA quite well. It was early 1990 – winter. This is probably a little odd that what I remember about leaving China is the struggle to get to Beijing airport after arrived in Beijing. Several friends and myself carrying large and heavily packed suitcases and we were doing bus, walking, bus, and so on so forth in cold weather and heavy snow. We tumble. Suitcase got loose, broke, lost wheels. Anything bad can happen, happened. And I was on my way to USA, destination: Los Angeles. After long hours of flying, I arrived at the Los Angeles. I was like, “America, here I come!” Looking back all these years, I think of many good things and experiences happen to me. One of them standing out is the freedom spirit, open express one’s mind, speak of true mind. I guess this is what I would never have if I never left China.