"Oh, the TV! At that point we had three channels in Scotland. And you came here and there were so many different channels, it was huge." 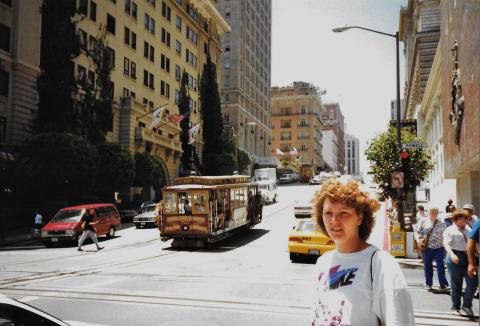 
So the first time I came was on vacation. I came with my parents, my mum and dad. And the person we were going to live with, my aunt and uncle, was my dad’s brother.

What happened when we left the airport? Well, I remember being in their car, and having to get out the airport, which wasn’t too different form the UK. But then when we started driving, it was a lot different. The countryside was different, the roads were much bigger, they were freeways as they call them here, motorways in the UK, which we don’t really have very many of. So the roads were much bigger, and the cars were bigger. Driving on the wrong side of the road, for us, was very interesting.

We kind of left the airport and you would drive, and you would be in one town and you would go into another town, but you wouldn’t go into the countryside! Which was kind of weird, all the towns were attached to one another, they were all very the same looking. Very new, compared to what I was used to in Scotland. All the buildings were new, and they were huge. Big tall skyscrapers, which we just don’t have.

When we got to their house the house was big. Much bigger than anything we would have in Scotland. And it had no doors. All the rooms were, like, open to one another. It wasn’t like you had a living room and a dining room and a kitchen, everything was just open which is not like it is like in Scotland.

Oh, the TV! At that point we had three channels in Scotland. And you came here and there were so many different channels, it was huge.

Did you ever expect to still be living here 20 years later?