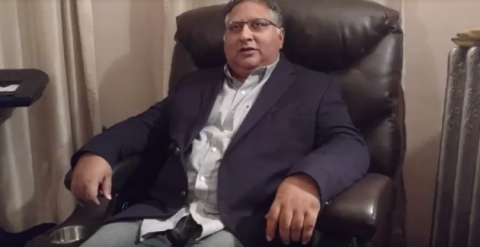 SB: 0:00
Could you state your name for the record please?

SB: 0:04
And Junaid how long have you been living in America?

SB: 0:24
Alright, where did you initially come to? Like what city did you come to when you first arrived here?

SB: 0:44
Alright, so would you mind talking about what emotions were running through your head as you arrived here? How did you feel on your flight here?

JB: 0:51
I was very excited. You know, I basically planned it for quite a few months before coming and I, however, was a little bit surprised or shocked when I landed at the airport. I thought it would be something really different as seen in the movies, and very neat and clean and organized. But I was a little bit, uh, you know, like disappointed to see the airport was pretty disorganized and dirty, the JFK airport. And you know, when I went through the neighborhoods and got to the basement of the person I was living with in Queens New York, just, just overall was a bad impression.

SB: 1:45
Oh wow, so what was something that stuck out to you the most? Like what about all this negative stuff and these lowered expectations? What struck you the most?

JB: 1:55
Well first it’s not that was all negative. I just basically was not, uh, ready for that. But when I came to Chicago the cab driver took me down Lakeshore drive. It was a bright sunny day and I just told my friends to stop where we were. I didn’t want to go back. This was just so nice and clean and beautiful, you know. I was introduced to [inaudible] by my roommate and that was kind of a treat for me back then, and of course McDonald’s was a big thing, and you know having to hear about McDonalds, and uh just the using public transportation and the underground or the L in Chicago was a lot of fun. Plus you know it was very, so much fun to watch people having fun out in the streets during lunch breaks or down in downtown Chicago or like people just playing live music on the streets, exc. As you know Chicago is pretty busy during summer, right.

SB: 3:10
Right so did anything in particular about the people or the culture shock you or grab your attention?

JB: 3:18
No, I was familiar with the culture already through the movies. I mean, as I’ve said I was a little surprised that, you know, things were not as, you know, as perfect as I had thought, but everything was not bad either. So I knew the language already so apart from the accent I had to find out, you know, like I’m used to using British English, like we used to like ask for the route for how to get somewhere and people said “route, like what are they talking about. I don’t know what route is.”

SB: 4:05
So uh, just to wrap things up, how difficult or easy would you say your transition was in the first few days?

JB: 4:14
You know, apart from the logistics point of view like finding a place to live and stuff and not knowing anyone, that was hard part, but you know like making friends was easy especially since I was going to school, so it wasn’t that hard in that way.