"But when you come here, very few folks can tell you that Nairobi has 4.4 million people, and they have skyscrapers, and working class jobs, and private schools. We’re not just all a village out there." 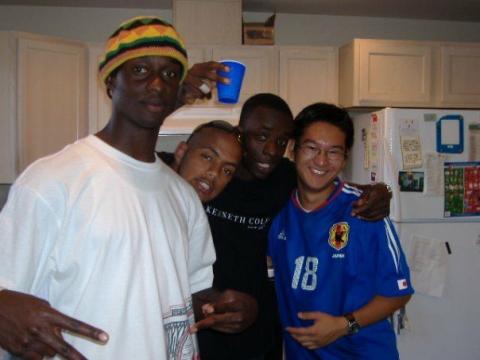 
Ken Nsimbi was born and raised in Nairobi, Kenya. Nsimbi first arrived from Kenya in 2001 at the age of 18 on a two-week trip to visit his mother, who was working in Seattle. When the time came to go back, his mother refused to send him and his brother back, and decided to keep them in America to go to school.

Ken is 32 years old, and goes back to Kenya every two years to visit the family that he has there. Originally, Ken came over on a two-week visiting visa to visit his mother, who worked in Seattle. When the time came to go home, she decided to let them go to school in the U.S., and did not send them back to Kenya. Though he at first missed his culture and was upset with his mother for making him stay, he has said that he is “grateful” that she did so, due to the opportunities that living in America has provided to him.


My name is Ken Nsimbi, and I work for New Horizons as a Drop-In and Outreach Coordinator. My first day, 2001, I would say, Minneapolis, that’s where we landed from Amsterdam. Coming from Minneapolis to hit Seattle. It was the 25th of December, and coming to visit my mom for two weeks. It was pretty crazy because I had never been to America, and seeing snow for the first time, that was a definitely different experience. Just different people, because back in Kenya, most folks that are out, they just look like me.

The toughest part is getting acclimated to the weather and the people. Because in Africa you can just go into your house and grab sugar or the neighbors, and we were living in an apartment complex in Beacon Hill. The first week, I thought we were the only ones who lived in it. Everyone’s just to themselves. There’s a lot of individualism, where back home its about collectivism. It’s collective, its a family, and it’s a village that raises a child. Here there’s a lot of nuclear family, back home its extended. So those are the two different things that I was seeing that I missed about my country.