"But, when looking back, those days are golden days. Those days were all really carefree." 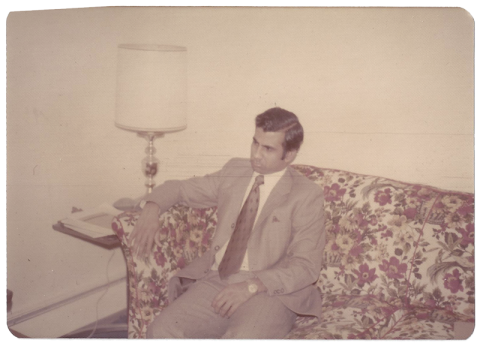 
Well, I landed in La Guardia. Fortunately, I was with another friend of mine from Toronto so I drove from La Guardia to Stevens Institute of Technology in Hoboken. I had some contact through my friends from Toronto. I came with one suitcase. So I came in and then I met this gentleman. He was also Indian. He was doing his PhD. So he said, “Eh, you can stay with me for a few days till you find your way.”

The reason I came to States at the time was I had a job offer---I’m basically a pharmacist so they had need for pharmacists those days. Cook County Hospital in Chicago were looking at resume, offered me, “Eh, you know what, we are interested are you willing to come down?” But once I landed in New York and came to New York, I didn’t feel like going to Chicago because I don’t know anybody in Chicago at the time. So I stayed in that room maybe for a couple of weeks. Basically, being a vegetarian, I just ate in McDonalds with apple pie and French fries and that’s my breakfast, lunch, and dinner.

Then, slowly I found out that I had my distant cousin in New York City so I met him. Through them, I came to know a few more people and one of those persons used to work for my uncle in India. So he said, “Okay, let me see whether I can get contact in working for the pharmaceutical industry.”

For two, three months I was just kind of looking for a job and applying and so forth. I didn’t plan to go to Chicago at the time. Worst chance I will go; otherwise I will try to see. People who I met basically said, “You know what, the time is not pretty good. But still keep looking.”

So I found a job somewhere around maybe October or so. But it’s not a pharmaceutical industry, but it’s a chemical industry. But it was fine because they looked at my resume and said they think I can do something for them.

I was coming for the first week or so from Queens to Morristown, New Jersey and I didn’t have a car at the time. So my friend said, “I have a car. I don’t drive. I don’t have a license so if you want, you can drive. Take the car.” So I took his car and drove and it was early in the morning. Six o’clock. It was very foggy. And I crossed the Verrazano Bridge and everybody is honking because I’m looking at the route how to go. I took a wrong road and I went onto the turnpike and I found out after forty minutes that I’m on the wrong road. So I stopped and asked the service guy and he says, “Boy, you’re in the wrong.” So I turn around and find my out. By the time I reach there, it would have been 8:15 or so. I was so nervous. The very first day on the job you’re doing this kind of thing, but the guy was a very, very nice guy. He said, “Eh, don’t worry about it. You know, these things happen,” and so forth.

So I settled down and once I settled down at the job after a week or so, I found an apartment. Meantime, in ’77 I went back home and I got married and she came back with me.

The big contrast I see is nowadays people come here with at least about 20-25 people to contact when they leave India. When I came---nothing, nothing, I’m not really crying, but those days, back in the 70s, there were very, very few people. Not many people available compared to what it is today.

I don’t regret a bit of anything because this country offered so much to me and especially for my kids. But, when looking back, those days are golden days. Those days were all really carefree. Except for the job issue, it was a carefree life. It was great. It was great.