"When I left, I was wearing a silk sari and I was all full of smiles; when I arrived here, my sari was in tatters and my shoes were biting, you know, the shoe bites, so my legs were full of sores. I couldn't even walk, I was limping. And I was practically in tears." 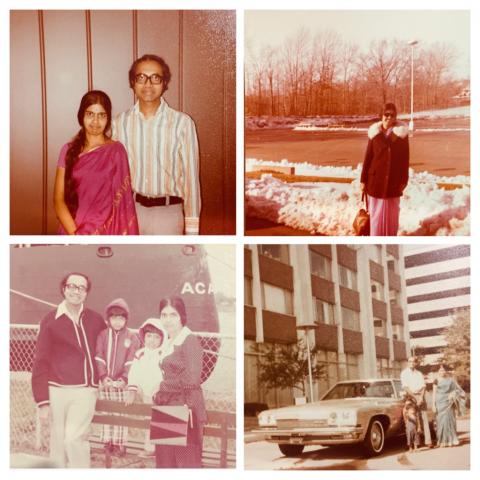 
What is your name?
Lakshmy Parameswaran.

What year did you arrive in the United States?
I arrived in 1973.

Where (city and country) were you living before you came to the United States?
I was living in Chennai, now, that is; in those days, it was called Madras and it’s in South India.

Which city and state do you live in now?
I'm living in Houston, Texas.

What brought you to the United States?
Well, in the 1960s, when the Immigration and Nationality Act was signed into law, it opened up immigration from Asian countries; until then there was a quota system. And so visas became available for doctors, engineers, other professionals in business and things like that. [Even] when that happened, my husband, Dr. Parameswaran, he didn’t even apply for a job in the United States; he was offered a job at Wayne State University to do research. He got a telegram one day saying, we offer you this position, let us know if you want to take it. So we thought, oh, that sounds like fun. We didn't even think, even though the immigration opened up, we didn't think we were going to go there, he wasn't even planning to try for any job in the US. But that's how it happened.

What mode of transportation did you take and how was your trip?
I flew. I think it was an Air India jet. When I left, I was wearing a silk sari and I was all full of smiles; when I arrived here, my sari was in tatters and my shoes were biting, you know, the shoe bites, so my legs were full of sores. I couldn't even walk, I was limping. And I was practically in tears. That's how I arrived.

Who met you, if anyone, when you arrived?
Yeah, when I arrived at New York, I think Kennedy Airport, my husband had come. He was here, this job was in Detroit at Wayne State University, but he had flown to New York to meet me. And we also have a cousin in New York City, who is also a physician, so both of them came to receive me.

What were your first impressions of the country?
I was too tired and exhausted. I looked outside, I remember, it was April. I remember seeing gray skies and lots of cars. But nothing registered at the time because I was too dazed and overwhelmed.

What did you do on your first full day?
This cousin of ours, we went to their house in Queens and we spent the first day with them. And my husband's cousin, she had two kids at the time, so just spending the day with her was good. Just talking in our language and catching up. So it was a soft blow, I would say, the fact that I got to spend the first couple of days with them.

What were some learning experiences you had in your first few days or weeks in America?
I mean, I was looking out at Queens, you know how it is, it's a busy busy place. The gray skies, it was very depressing to me, strange. We don't see gray skies in India much, you know, even in the rainy season, it just rains, but then it gets nice and sunny most of the time. And I remember looking out the window, and there were cars everywhere, parked on both sides of the street. But I didn't see anyone, so I said to myself, think of these cars as people. Because if there is a car, there has got to be a person, right, at least one if not more. So I was thinking to myself that's how I should look at it, [that] cars are people. I don't know where [the people] are, but they are somewhere in that vicinity. That's what I remember thinking, because I missed, in a bustling place like Queens, I missed seeing people.

What do you think the greatest difference was culturally in terms of society and Indian society in America?
All of that sank in only after some time. In the beginning, I was too new to pick up on any differences. But over a period of time, I noticed a lot of differences. Of course, I noticed that in Detroit, we lived [in] downtown, so first time I saw African Americans in my life. We had seen, we knew about white people, because we were under the British Raj and all that so that's a familiar kind of story you hear, but I hadn't seen any other ethnicity or race besides that. So, there were a lot of wonderful people in my building; for example, the doorman, Mr. Barry comes to mind, he was so friendly. And there were a couple of other women who would be at the front desk. I thought they were all nice people, I didn't particularly think that, oh my God, they are so different from me, you know, why are they like that? Only difficulty was in understanding what they were saying and for them to understand what I was saying. I thought in those days, all of them had accents. I would write to my father saying, you know, Americans do not know how to speak English, they all have accents. Because our English is British English, we thought that's the right English, right? So anything else was, to me, accented English.

What do you think your favorite part of arriving in America and living in America was?
For me, at that age, I felt free. You know, I was away from everybody. So I thought, here, I have to make decisions, small ones, big ones, about what to eat, what to wear. I don't have to ask anyone, like, is this okay, is that okay? That was a liberating experience for me, I enjoyed that thoroughly. I thought, ooh, how nice, no one is gonna tell me, oh, why are you doing this, you cannot go out in that outfit, whatever it is. I remember that feeling of freedom that enveloped me, and, you know, I was so excited.

What was the most difficult part of adjusting to American life?
You know, we were lucky because my husband came with a job, and there was an apartment, and we didn't have a car for several months, but in a few months, within a year, I think, we bought a new car.
So life started off nicely. I cannot say that I struggled. The struggle was about doing the day to day things, because I felt liberated that I had the freedom to do whatever I wanted, that also brought responsibility. So I had to think about money, how much to spend, where to shop, what is available, what's not available. So that responsibility was the thing that I felt, like, oh God, I have to do all of these things. I'm responsible for lunch and dinner and shopping and paying bills, those kinds of things. And also there was some difficulty because of the communication in English. Conveying to people whenever I transact with them, conveying to them what I want or understanding what they are telling me, that was a bit of a problem in the beginning.

Knowing what you know now, what advice would you give to a new immigrant coming from India in a similar situation to what you came in today?
Well, the people who are coming today, definitely they are coming at a different time, different place, right. And they know a lot more and they have got families who are already here and they have a lot more; the internet has opened up a new world for them, people are aware of things that are happening here. So I don't know if I could [give] any kind of advice about what to bring, what not [to] bring, those things are obsolete now. My concern [is]that the newer immigrants who are coming here who have come after we have come 40, some years ago, (not 40, 1973, I don't know how many years is that) is that they should get involved with this society. If you are coming to live here, you have to have a vested interest. You cannot just say, I'm here to make money, I'm here to further my training, but then [say] my heart is in India, my mind is in India, I'm not going to venture fully into this world. I think that is very wrong if you're coming as an immigrant to stay for the long haul. My advice would be to get involved, whatever way, culturally, politically, socially. Get involved and become a part of this society; that won't be betraying your home country.

And overall, are you happy that you came to America?
Yes, I think so. We never went back, number one. We came thinking we will go back, we thought we would be here three to five years, make some money, buy some nice things and go back and be better off in our own home. That didn't happen. We got immigrant visa, that was one reason; we got immigrant visa very quickly. We didn't even ask for it, the University sponsored and got us the green card. So when we got the green card, then that kind of opened up doors for us. It was a choice; we could have still gone but we didn’t go back. Looking back, I would say that we are better off having been here. We could raise our children and they could become whoever they wanted to be. In India, most likely they would have followed a cookie-cutter profession, following the father or the grandfather. My children, one is a writer, one is an economist. These are things that they probably couldn't have been part of or made it [as] a profession. So looking back, I think we did the right thing for our children and we also did well. I went back to school, I finished my master's, I started an organization for South Asian battered women here in Houston. It has grown into a very large organization. We help women to become independent, abuse free. We provide all the resources. So that's something I started 25 years ago, just from home with a few other Indian American women. And I'm very, very happy and proud that I did it because now it's helping hundreds and hundreds of women. So I don't know if I could have done all of that had I gone back. My husband did very well. He became a surgeon and he was an independent practitioner, and he was very happy doing surgery.