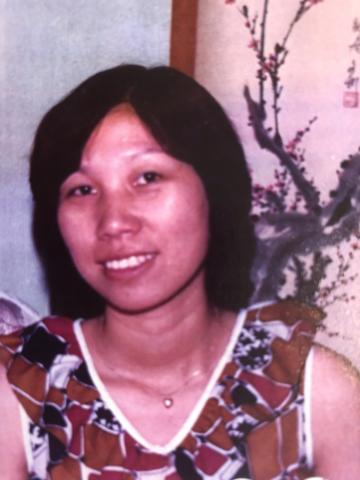 TG001 was the number on the boat. The boat that took them from Vietnam to Malaysia. In 1979, after years of fear and stress, Lina Ly was finally able to flee from Vietnam with the remainder of her family, four long years after the war had ended. Her father of Chinese-Vietnamese heritage fought during the war as a major in the Army of the Republic of Vietnam (ARVN) on the side of the South Vietnamese. When the war ended, and the Communists took over, he was assigned to a labor camp from which he most certainly would have never returned. Rather than report to the camp, he, his wife, and their first born sons—Lina’s younger brothers—were able to escape to America. Money was an issue, but it was imperative that they leave immediately, so it was only possible to take four passengers, and that meant that Lina, the eldest daughter, would be responsible for taking care of the remaining family until they could orchestrate their own escape. The family members left behind included Lina’s husband, their young daughter, a grandmother, two sisters, and their youngest brother, who was just a few months old—almost the same age as Lina’s daughter—when their parents had been forced to leave.

It was a grueling period of time before Lina and the family were able to gain passage on boat number TG001 to make the first leg of the long trip to America. Over the course of several months of 1975—the year her parents and brothers had fled, Lina couldn’t help drenching her pillow in tears every night because she didn’t know whether or not they were okay or if they had even made it safely to the United States. Each morning she would hang her tear-soaked pillow out to dry. Eight months of sleepless nights passed before she was handed a note written in code that let her know that they had, in fact, arrived in the U.S. At that point, she didn’t know where exactly her parents and brothers were, only that they were safe. During the four-year waiting period, it was not possible to have mail from her parents delivered directly to Lina, and arrangements were made so that a family friend could slip her periodic, coded messages.

In that first year of her parents’ escape, Lina was brought in for interrogation by the Communists three separate times. The five-story family home that belonged to her parents, but where she and the remaining family still lived, was completely ransacked by six or seven menacing soldiers armed with rifles. They were on a mission to locate her father and take him into custody. Even though she was perpetually afraid, Lina put a brave face in front of her interrogators when asked about the whereabouts of her parents. In each instance of questioning, she stood her ground and bluntly refused to give up the family’s secret. This meant pretending, too, that her youngest brother, Christopher, was her child. The soldiers grilled her about this incessantly. They were curious how it was possible for her to have two children so close in age. She insisted that her daughter Mylinh had been born premature and that she had gotten pregnant with Christopher soon thereafter. During the course of the interrogations, she remembers one of the men screaming at her in frustration, “I ask you one question and you answer with two more, you bitch!”

The Communists tried more than once to take away the family home, and there was more land and property her father owned that Lina, with the help of understanding friends, was able to secure and hold onto by finagling documentation that supported her ownership. During the four years of waiting, Lina worked in the same bank she had been working in before the Communists took over, but under the new rule, her duties shifted to where she was forced to go door-to-door and document the belongings of business owners that the Communists could then confiscate as bank stock. Whenever possible she would slyly warn the business owners to only declare a small portion of their earnings so that they wouldn’t have as much of their valuables stripped away. She remained quietly defiant, never entirely complicit in the Communists’ harsh new dealings. Each day when her bank shift ended, she would go to the family farm and harvest the morning glory that she and her husband planted so that they could sell the vegetable crop for extra money. The itch from the mud that caked onto her body from standing so often in the wet fields rarely went away.

Lina recalls one time receiving a package from her father that contained $500 dollars American cash. Unfortunately the money, though well-intended, wasn’t useful because if she had tried to exchange it for Vietnamese dong, it would have raised a red flag to the Communists that she had lied about her parents whereabouts.

When Lina and the rest of the family finally secured passage on boat number TG001 in 1979, they were each only allowed one item of luxury. Lina kept and wore a gold ring that was later pawned once they arrived in Malaysia when she needed money to be able to feed the family while they waited for passage to the United States. They arrived on a small island where they spent five months before being transferred to the main refugee camp in Kuala Lumpur. Some rations were provided, and Lina remembers that they ate long silver fish almost every day for those five months. After that, she never wanted to eat that particular fish again, and she never has. Whenever she sees that fish in the market, it brings back memories of their time on the island.

Under Malaysian statute, Lina, her husband, daughter, son (she birthed her second child in 1977,) and grandmother were declared refugees, which gave them high priority for sponsorship to the U.S. For whatever reason, her sisters and youngest brother were considered immigrants so their status was given lower priority. Because of that ruling, the family was divided yet again. Eventually, they flew Pan Am to the United States in two different planes, their journeys separated by a month or so.

Lina and her immediate family arrived in Los Angeles, May of 1979. She was 29 years old.

About her arrival in Los Angeles, looking back on it, Lina had this to say:

“I remember when we arrived, I only had ten dollars in American money. We had exchanged currency in Malaysia on the way to the U.S. My husband didn’t have any money. Only I had ten dollars.”

“The first thing I noticed was that everything was so clean. The air was fresh, and I had a feeling of relief. I was no longer afraid. The cloud had lifted, and I was finally free. I was very excited and happy. To be reunited with my family was exciting. I was not feeling tired from the journey. Just excited.”