"So I spent my first day in the country shooting bullets in the forest, and I was still pretty tipsy." 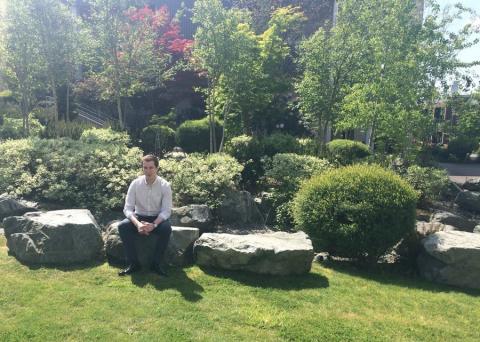 
Luca Nasswetter knows he doesn’t fit the image of an immigrant in America. For starters, he’s white and though he speaks with an accent, he admits that it mostly works in his favor. There is a mindset in America about Europeans being highly elegant, educated, and polite, Nasswetter says, “Which is not always the case.”

Though he came from Germany at 18, the 20-year-old rugby player feels more attached to the US than his home country. Certain state gun laws and “massive” department stores made a lasting impression on him the first day he arrived to the country. But he is very aware his swift acceptance into US society is an experience immigrants from different parts of the world do not all share.

One day, Nasswetter hopes to play rugby for the German national team. But he doesn’t see himself leaving the United States any time soon, and this isn’t getting in the way of his passion for the sport. Although it is far more popular in Europe, Nasswetter finds Seattle’s growing rugby scene one to watch out for and hopes to see the Seattle players he has the privilege to train with make it to the world cup.


My mom married my stepdad when he still worked for the FAA in Germany, but he got relocated back to the US. My brother and I are were the right age to get a Green Card if we moved. So we decided to say goodbye to our family and friends, which was really hard. Since I was of legal age to drink in Germany, I got drunk to survive the flight. When I got to America, we visited a massive Walmart, which boasted a wide variety of sodas and sweets, which was very different from the small European groceries I was used to. The Walmart also sold guns. So I spent my first day in the country shooting bullets in the forest, and I was still pretty tipsy.