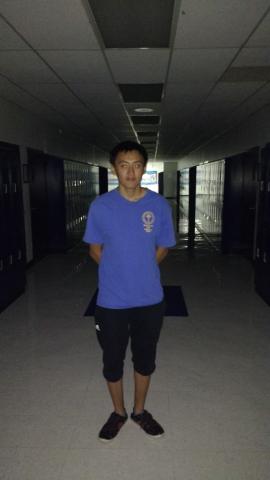 
Jinming is from northeastern China and he first came to the United States as an exchange student at the age of 16 to study at Westbury Christian School in Houston, Texas. Jinming went to Westbury for all four years of high school, spending the school year with the family of his dad's college friend and the summers back home in China.

Jinming says he often felt disconnected from this host family because he just had different living styles than them. He didn't like to snack and they did. He liked to stay up late and they liked to go to bed early.

He had to adapt a lot once in the United States, a country he'd never been before but seen portrayed heavily, and often favorably, in Chinese media. Jinming, who now studies at the University of Washington, had to learn to speak English, a language he'd only previously spoken in class and overcome the fact that he wasn't going to be perfect at it, among other obstacles.


So, I come from China, took a flight from Beijing to Houston. It’s like 13 hours; it’s a long flight, pretty tired. The first thing I realized is that like in [the] airport there are many people from different countries, not only like America, but from like other European countries or African countries.

The weather is hot. It’s pretty big, like the first thing I remember is like the road is so wide, like lot of cars. And it’s all flat. Like in China, it’s all buildings, like tall buildings, but in Houston it’s like all flat. There were like a lot of things like I don’t know what it is, a lot of signs in English and I wasn’t, wasn’t, speaking English at the time so I didn’t know what like those, I feel like pretty, pretty overwhelming. Like I say something in English in China but only in class, so I don’t do that like every day and all the time. But like here, in Houston, I have to do like everything in English. Like go shopping in English, like buy something in English, like order food in English, it feels bad. But it only took me like a month to realize I have to do that, so I start to really like focus more on the things I do rather than speaking English.