"People consider me kind of the archetype of the French person because I study French literature, I like good food, and this kind of stuff." 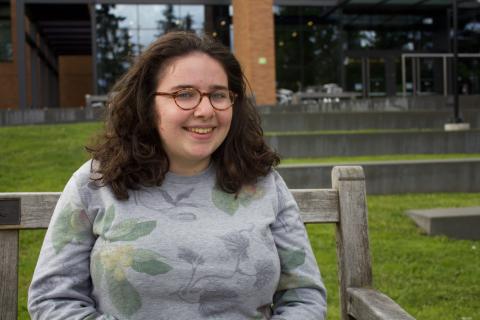 
So, my first day was when I arrived in Massachusetts. The first thing I had to do was go through [customs.] The person had a really, really thick accent.

I arrived at the bus station and the first thing I noticed was all the food everywhere, all the McDonald’s. The portions are twice the size as what I would get in France. There is not as much appreciation for good food. Most of the meals here are, like, 20 minutes or less, while in France we can stay an hour and a half just eating super slowly and speaking at the same time. For us, a meal is also a quality time you are going to spend with someone. Also here, like, if you work, your break is going to be an hour or less, while in France, we finish later, but the breaks are an hour and a half, two hours because it’s really important. Some people even go back home to eat and then go back to work.

I’ve felt more French here than I’ve ever felt in France. People consider me kind of the archetype of the French person because I study French literature, I like good food, and this kind of stuff. For me, that’s really funny, too, how they consider me compared to how I consider myself.

I also just missed being home after the bombings that happened in November. I really, really, really wanted to be home. It was much harder not being home than if I was home and scared to be in the street. I think that’s the moment where I really missed home the most. The big concert hall that was targeted is the concert hall where I’ve been. Also because I wasn’t in a big city. My friends who were in Boston got a lot of support from people. Where I was, we were among French people, trying to be with each other. The support wasn’t really there. But I think it’s a specific case, because I know that most people got support or just, at least, were left alone and not bothered.