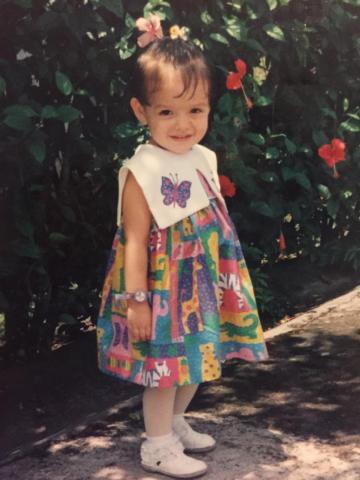 
At seven years old Maria Villegas and her mother moved to the United States from Costa Rica. While reluctant at first, Maria was excited by the novelty of being in a new place and getting to explore Washington state. Although there were some culture shocks at first, such as social interactions, food and mannerisms, she found herself picking up the language, and assimilating very quickly. Today Maria enjoys expressing herself through dance, and hopes to become closer to the Latino community in the United States, while helping to give back by empowering the community of which she is a part, and challenge the false stereotypes that exist in our society today.


"I used to go to the symphony and bounce up and down in my seat and be like: 'I just can’t stop moving!' I just really liked it, it was the structure, the discipline. I like to think of ballet in particular as a little outlet for all my perfectionism. It feels good to move, it feels good to do something with my body."

Maria Villegas is a 21 year old student at the University of Washington, studying dance and political science. Maria is originally from Costa Rica, but moved to the United States when she was 7 years old, in 2004.

Maria’s mom worked as a diplomat in Costa Rica and felt that the pair needed change, so Maria and her moved to he United States so that they could practice their english and her mom could look for more job opportunities.

However Maria was not particularly enthusiastic at first.

However, even with her reservations, the journey seemed like a surprisingly pleasant one.

"The night before we slept over at my grandmothers because our, or my uncle was driving us to the airport in his car. We had to get up super early in the morning and I was sleeping on an air mattress in my grandmothers living room, and waking up was really like: “oh okay, this is actually happening. I think that was the first moment that I realized that that was actually happening. I didn’t believe it before."

About the flight specifically Maria recalls:

"A Bratz doll and a blanket as my carry on. It didn’t feel like as long as I think it should have to a seven year old cause it was two three and a half hour flights, but it felt fine. And the women sitting next to me, with our meals we got like snack sized Doritos and the woman next to me gave me hers. That made me feel better."

Then when she arrived in Seattle, she had her first ever culture shock.

"I thought everything was really odd. I liked that it was cold because we came in November. Costa Rica is really really hot and I always hated the heat as a kid. I got here and was just like happy that it was finally a decent temperature for me. School was weird because everyone was speaking a different language and I didn’t speak that language."

Of course, moving to a different country also came with its setbacks.

"Everything was twice as difficult as it needed to be because there was that language barrier. Here and it might be a Seattle thing, but people don’t really talk to each other on the streets, if they don’t know each other, and a huge part of latin american culture, is you talk to anybody and everybody, there’s no barrier there. It felt like everyone was really cold. It seemed like a much less, like the temperature matched the environment, it seemed like a colder environment just in general, less welcoming. I went to McDonalds a lot. The one thing that Costa Rica and the United States had in common was the McDonalds and so I liked to play at the McDonalds and get the toy and the happy meal."

And yet even with difficulties, she found herself to be much more resilient than she ever realized.

"I think kids are very adaptable. I think just the fact that I was so young, I got here and I liked it, things were shiny, things were pretty, there were lots of cool new toys I never had before. I was learning a new language and picking it up really quickly and everyone was telling me how great I was doing so I loved that. And I was doing really well in school, even though I like was on a completely different curriculum beforehand and I think all of the positive feedback, all the adults around me thought I was the most precocious little thing."

Yet even with immediate successes, navigating two cultures at once was not always as simple as it may seem.

"As far as the way I look, I bleed in really easily and most people just assume that I’m American. I kind of like, liked that, I played that up and so it wasn’t so much an external pressure but it was an internal pressure, like how convincingly American can I be. So it was myself driving myself to assimilate faster and faster and get used to everything. But I dropped all of my like Costa Rican pop culture, like my favorite singer, immediately. Just now am I going back and listening to some of that stuff. It’s weird because you can’t ever really shake the culture you grew up in, those first 10 years of your life are so crucial in terms of what gets ingrained in your body. Culturally I feel like now all this stuff that I thought I’d forgotten about I hadn’t, and it’s all in there. And it’s made me realize that how important culture is to everything we do, it’s a part of the way we socialize, it’s a part of the way we eat,everything is cultural and I’m starting to understand the different reasons behind what I think are little quirks because people here don’t do them but people there do. And when I go back to Costa Rica all of my Americanisms are quirky there."

Over the years Maria has realized her desire to connect with people in North America whom she shares a heritage with.

Rather than just being a member, Maria has also realized her desire to empower the community of which she is a part.

"I realized it’s kind of my responsibility to change the way people view hispanics, especially in media. They’re portrayed as a servant, as kind of less educated people, as the maid with a really heavy accent who are kind like “what?” but it’s my responsibility as a latino to be like “no. This is who we are. We’re actually one of the smartest people in the country. We’re the largest consumer in the country. That was like, just completely changed my purpose of what I want to do with my life and changed to more like a giving back to that community and raising it up."