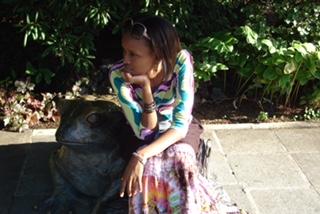 
Rose Gabone came to Seattle from Tanzania in 2007, the place her Tanzanian boyfriend (and now husband) lived at the time. She experienced major culture shock upon arriving in the city. It ranged from not understanding the purpose of calling to make appointments, to transitioning from Tanzanian english to American english, languages you would not assume to be so different. Another major hurdle has been understanding the significance of being black in America, a part of her identity she never thought about in Tanzania.

Since she moved here she has had the chance to go home a couple of times, making herself a little less homesick each time. Rose’s sisters, mom, nieces and nephews all live in Tanzania, making it difficult for her many times to not miss home, but she does her best to live alongside them with a weekly phone call. As Rose marks her 10th year in the US she continuously notices how much her process of acknowledging her own identity in a new country has changed her.

I remember I came here like 7 years ago and coming from Tanzania where we do speak English, I had the idea that I understand English and that English was not part of my problems. But when I came here I realized I did not understand what people were saying. It was not a very easy first experience actually.

Another shock actually that I remember having was like making appointments ya know. Having to meet with someone you have to make an appointment you have to send emails and back and forth and that was like never happened in my life. When you meet someone you just show up or you call them and if they’re there, they’re there, and if they’re not, they’re not but the concept of making appointments to meet you friends was just very foreign.

One concept that was very foreign to me as a person living in living in the United State from Tanzania was the fact that I was black. Just the realization that in America i’m black. Back in my country i don’t think of myself as anything, that’s just me. So coming here, the concept of being black was it’s everywhere, it’s on your face ya know. Like when I came here it wasn’t as much but after events started happening of shootings and things like that, the concept became more and more vivid, and right now it’s, it’s part of me when in the beginning it was not there. So i realize it’s another a part of me which is good, and not good in some ways.
But also it is important to know.