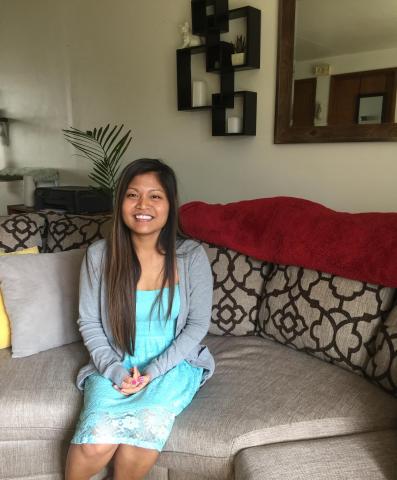 
A Christian refugee immigrates to the United States for freedom

Merry Ruat, 21, is a refugee from Myanmar or Burma and came to the United States with her younger brother in 2009 when she was 15 years old through the United Nations. She lived in a foster family through the Refugee and Immigrant Services from the Lutheran Community Services with her younger brother. According to Ruat, there are a lot of ethnicities in Myanmar and she is from an ethnicity called, Chin which is a small and only Christian group in Myanmar. However the government of Myanmar does not favor in Christianity but Buddhism. Christians have less freedom and they will be dead if they fight against the government. Therefore, they tried to flee to other countries.


We got on the plane. We flew here. And we got here in Washington, Seattle. And we got off of the plane. And then, we saw this very very white and tall woman. And another another white woman. And then there was you know a white guy with a big smile on his face. And they had a little sign that said ‘Welcome Merry and David’. I remember driving from the airport, I was thinking like “Wow! This car is really nice.” Cuz they they were driving Mercedes you know. So I was like “Wow! This is a nice car!” So but I I also remember you know being very very tired. So we drove to the house. And I remember seeing the house, you know, “Wow! This is a nice house! It’s a pretty big, you know, really nice house.” And we went inside the house. And I remember just looking everywhere, you know, cuz I I have never lived in a place like that, you know, in my whole entire life. And then there was the dog. We thought she was so big. But she was still a puppy. But we were like “Wow! That’s a big dog!” And, we were very tired. So my foster mum showed us where my room is, where my brother’s room is. I was like “What?! We have our own room?” Cuz you know in my own country, you don’t get that. You just sleep on the floor whatever in the living room. And I was, it was very new to me. And it, and at the same time, it also seemed everything I was always wanted. So, it was a mixed emotion. I was happy but at the same time, I also missed my country a lot.