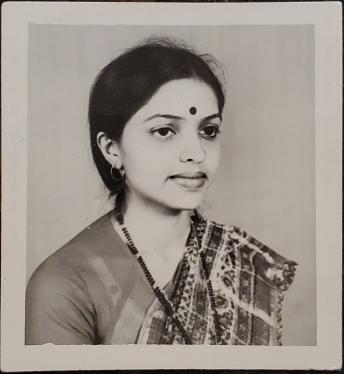 
The first week I felt very lonely, because it was very quiet. I had come from a very bustling city, where you hardly could sleep it was so much noise there...in Dadar, I grew up in Dadar. So it took some time for me to get used to it. I went to see Astroworld. At that time the tickets were $35. And I in my mind, I said how can we spend this kind of money because we were also struggling to pay the rent. And I was so attached to my family, so rather than enjoying Astroworld, I cried because I had two nephews who were at a very young age, and in my mind I felt that this is the age that my nephew should have seen this one, but I'm looking at this.

Unfortunately, I had a really bad start. My husband didn't have a job, so when I found out there were as alot of tension and commotion and so many things were happening. So within a week, or I think two weeks, I started working to help him out. I started working in a laundromat. Then in the night I started watching I Love Lucy, and all the American shows then. There was a soap called Dynasty, and General Hospital, and slowly slowly I started looking, getting the culture.

Then I decided I should go to school. So in...September 83' I started school. That's where I got to see more people, people with American origin. One of the things which really really bothered me...when somebody made a comment. At the time the Prime Minister was used to be Morarji Desai in India, and he was a believer of the urine therapy. And somebody at work told me that India is such a poor country that they have to drink their own urine, and that really really really bothered me alot. But I said no, that's not the case. But in those days, and particularly in Texas...I go...I mean I never felt then...but if I go back, I felt that there was discrimination, there was some discrimination. After graduating, they wouldn't hire me even though they would hire other people. But I just felt that maybe because I was from new in the country, and I was not confident or I didn't show the confidence; but I was the topper in the class. I got a job, and I used to change two buses, and then take a cab to reach there. It used to take me two hours. Then I would come home, and then I would come do things. So that was a very tough life then. In my good memories...my friend...Rajula, we used to talk everyday on the phone. Even though we were kind of broke, but we would go see things or do things like a fun thing...like a movie or something once in a while.

The people were very nice, particularly the Indian community. In those days more because there were very limited Indians. We used to call all the people at our house. Then all these youngsters they would call us, and then we would watch the TV and have fun and things like that. So everybody would go to each others place for the parties and that's how we tried to get that homely feeling.