"You never think that people with those kinds of qualifications can be refugees. But, when the war broke down, it could reach anybody. Refugees can be anybody." 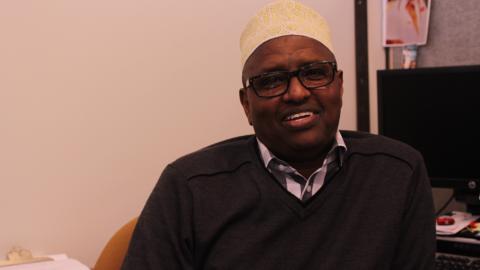 
Mohamed Sheikh Hassan had always enjoyed a stable life in Somalia. He lived in the capital city of Mogadishu with his family and worked as a chief accountant for the United States Agency for International Development office in the country.

However, that was before civil war broke out in Somalia in the early 1990s.

Hassan described the outbreak of the war as happening on short notice, with his family forced to flee in response to the barrage of bullets and constant violence that came to characterize the city. After running from their home, they sought refuge at a border town between Somalia and Kenya for three weeks in anticipation for the war to soon subside.

“But, things got far worse than we expected,” Hassan said.

As the civil war continued to escalate, Hassan said his family had no choice but to flee to Kenya, where they were taken to the Otanga Refugee Camp.

Hassan and his family lived in the camp for three years, where they endured abysmal conditions: scarce food rations, hundreds of people forced to share one bathroom, the constant threat of deadly diseases like malaria and typhoid.

While Hassan once worked as a professional in Somalia, he described his life in the camp as an experience that stripped him of everything.

However, because of his background working for the U.S. government, Hassan and his family were given the opportunity to resettle in the United States as refugees. After a lengthy procedure that included a screening process, extensive medical check-ups, and traveling to the capital city of Nairobi to wait for a resettlement location, Hassan and his family were finally told that they would soon be headed to the Pacific Northwest to start anew in Seattle.

“You have doctors, you have lawyers, you have engineers, you have surgeons, you have all kinds of people,” Hassan said. “You never think that people with those kinds of qualifications can be refugees. But, when the war broke down, it could reach anybody. Refugees can be anybody.”


My name is Mohamed Sheikh Hassan, I am Somali, I was born and raised in Somalia, I am a father of six kids. I came to United States in 1994 May as a refugee with my family.

I came in May, and you know May people treat it as like summer, right but I was freezing because I came from a hot tropical country. And the first night when we came in is we were feeling so cold that the blankets that you are going to use are so heavy because our entire life we used a bed sheet, that single sheet… bed sheet, cover sheet… we used that to sleep on but now when you put yourself in the blanket it’s so heavy you can’t even breathe, you can’t even sleep it is challenging.

So when you come in the airport and see all these officials, homeland security all… all others it’s kinda a scary moment. You don’t know what will happen, they will interview you again, they will send you back home or what not that’s what comes to your mind.

Then you’ll…they’ll… from the airport they will take you and bring you in the unit that they have ready for you.

The first thing you do is the television just to see the environment what is going on. Well, kids enjoy it the most. Kids are going to be having fun because they try everything in the house. The stove, the fridge, they drink a lot because they don’t get all this food everywhere. And the mother become kind of terrified say ‘what would happen now?’

* Hassan said that he grew up in the countryside of Somalia, where they never celebrated birthdays and only used the lunar calendar. As a result, he thinks that he was around 25 or 26 when he arrived in the U.S., but is unsure of his exact age at the time.