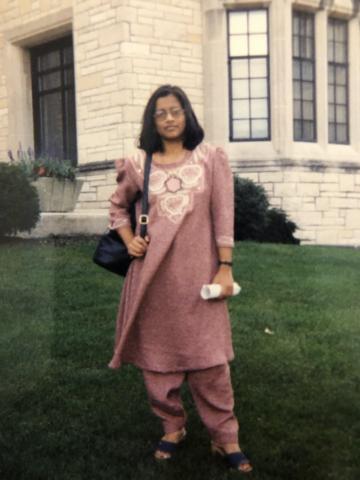 I came to Toledo, OH to enroll in my Master's Degree. I landed at Toledo airport at 10 PM. The Indian student I had contacted, who was supposed to come and pick me up did not show up. He did not have a driver's license and the friend who had a license was out of town. So he contacted the International Student Association and asked them to send someone to pick me up.

But when I picked up my luggage at the baggage claim, there was no one to pick me up. At 10:30 PM, the airport became nearly empty, except for myself, an African American gentleman and two Chinese college students. I began to get worried and wanted to call my contact. Then I realized, I do not have coins to use a payphone, only dollar bills. And there was no shops open for me to get change. At this point, I was completely scared, unsure of what to do. The African American gentleman walked up to me and asked me if I was waiting for someone. I said a friend was supposed to pick me up but I have no change to call him. He kindly gave me two quarters. I used one of them to call my contact. He began to panic and asked me to call back in 20 minutes so he could call the International Student Association.

While I was waiting to call him back, one of the two Chinese students approached me and asked me if I was "KRUPA". I said, YES!!!!! Apparently, they were sent by the International Student Association but their records indicated there were supposed to pick up a "MR.KRUPA", not a "MS.KRUPA", so they were LOOKING FOR A GUY!!!!!!!!