First Days Project
My name is Naazish YarKhan.
"I wasn't scared or nervous about leaving India. It was expected that girls would move away from their parents' home to wherever their spouses lived." 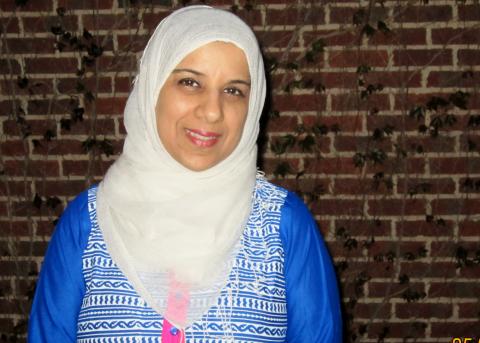 In Bombay, we're surrounded by people — the cook, the cleaning lady, the vendors who come to your door to sell eggs, fish, vegetables or milk. There are uncles, aunts, cousins, second- and third-cousins of your extended family. If you are a friend of a friend, upon introduction you instantly become a friend of mine, and that means you are invited to come home for a meal even if we've just met, are gladly offered a helping hand, and generally live a life governed by the rules of reciprocity. In the US, I discovered, people could be friendly but it often stopped at a handshake.

Like many immigrants, it was marriage that brought me to the US in the early 90s. My husband was an undergraduate engineering student at Northern Illinois University at the time. I wasn't scared or nervous about leaving India. It was expected that girls would move away from their parents' home to wherever their spouses lived. Many people I knew in India had relatives who lived in the US, UK, Australia or Canada. But I was diving into the deep end and didn't even know it.

We lived on campus at Northern Illinois University, an hour's drive from my in-laws' home. While my husband went to class, I sat in on film festivals and theatrical events, took a political science class, freelanced as a writer, worked as a telemarketer and haunted the college library. In a nutshell, I mostly spent my days on my own.

While I could feel the gnawing emptiness, I couldn't pinpoint where my loneliness stemmed from. Each weekend, my husband and I attended at least two social gatherings with friends of the family. The Indian immigrant communities in the Chicago area are large and connected enough that people socialize with each other frequently. My in-laws had been here since the 60s. They had close ties with more people than I knew even back in India. Though I felt welcome and fit in seamlessly, the need to connect at a deeper emotional level, to be understood for who I was, was missing.

I didn't have the comfort of cultural shorthand. I didn't understand what made David Letterman amusing. I didn't get what made Friends such an awesome show. I had to learn that when someone said, "How interesting," they meant "how odd." "How are you?" isn't really an invitation to tell someone how you are doing and "We must do coffee sometime," isn't a literal invitation. I learned that the norm is to use words rather than emotions. I had to say, “I'm so upset” rather than allow myself the luxury of tears. And if I was excited, it served me better to say, “I'm so excited” than to lose volume control and interrupt a conversation.

In India, emotionally rich relationships seemed to have formed on auto-pilot. Here, it was all about scaling walls of others' "alone time" and "my own space" to make friends.

It often fell to my husband to play the roles formerly held by my aunts and grandparents, siblings and parents. My cheerleader, my rock of Gibraltar — he had to be all those things and no one had prepared him to do any of it. How could one man do the work of an entire extended family?

I became committed to creating for myself the support I craved, the security I felt back home, the confidants and cheerleaders I could always depend on. It meant pushing myself to be vulnerable and wholly present in every relationship, just as I had been when I was growing up in India. It meant realizing that I didn't have to have the same interests, the same background or age as someone else to become close friends. It also meant having patience. A beautiful garden grows slowly. In my case, what started out as seeds, has flourished for 20 years.