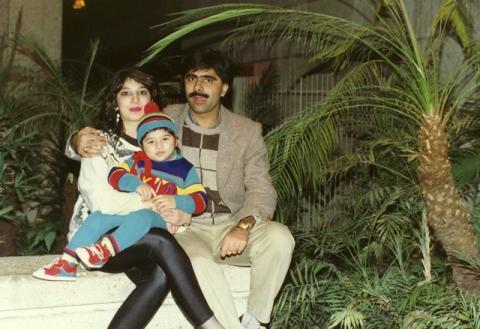 
We came... Ali, I and our son, Zain... we came to the United States in September and we came directly to Austin and we've been here since then. So, it's been a long time. I was extremely excited to come to the States. I had lived six months in London and I had seen other parts of the world, but hadn't been to the United States so I had a very different concept of being here when I arrived here. I thought Austin was a really small town. That's what I heard from Ali, that it's a very small town, but when I arrived here it didn't seem like that. But, Ali was so frustrated in Pakistan, but when we came to Austin... when we arrived here I could see the smile and energy that he had in him. That I can never forget. And we're so blessed... we're so blessed to be here.

Let's see... Ali, as he mentioned, there weren't very many desis around. I hadn't seen any Hispanic people, so when I saw Hispanic families I screamed to Ali, "Desi families!!!" He said, "No no no, they're not desi," but that's how it started.

We were very excited to be here. When we arrived we stayed for a few days in a hotel and then we rented an apartment. It was a small 2 bedroom apartment. It was fantastic. We used to go shopping together to buy household things and my concept was... I did not have the concept of dollars at that time. So everything that was 10 dollars, I said "Oh! That's just 10 rupees, that's so reasonable!" But then Ali explained to me. I was very naive, I was really silly and dumb. (Laughs) But being here for such a long time is fantastic. I'm so glad that we are here and our children have grown up here. We are so blessed. Plus now Ali's family is here so that's wonderful to have them so close by.