"So I stayed at the hotel all night without eating anything, completely tired and hungry, because of the fact that I didn't know where I was and they had told me not to go out at night." 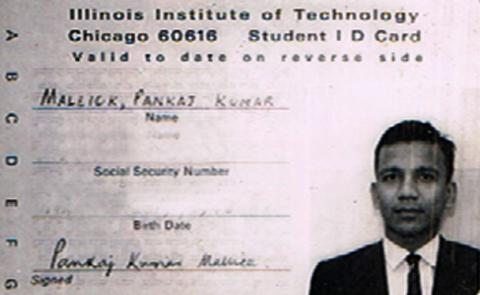 
I came to Chicago for higher studies... for graduate studies. Through the international office at the university two ladies came to pick me up. I didn't know them and they also did not know me. But I was the last person to walk out from the gate and they asked me if I was Pankaj Mallick in... the name was not pronounced correctly, but that didn't matter. They picked me up and they were taking me to the hotel and on the way they asked me where I wanted to stay and I said I didn't have much money with me. So, they said, "How about if we take you to YMCA?" And I said, "Fine, that would be good." So they took me to the YMCA, but before they took me there they warned me that YMCA is not located in a very good place and I shouldn't be walking out at night to look around. Anyway, they left me at the YMCA and went home and I was, of course, very tired and dazed and bewildered and all that stuff. And at night I was very hungry. I didn't have much food with me. Actually, the little bit of of food I had from India was very little. I ate that, but I was very hungry at night and I didn't know what to do because they warned me not to walk out. So I stayed at the hotel all night without eating anything, completely tired and hungry, because of the fact that I didn't know where I was and they had told me not to go out at night. So that was the first night in Chicago.

And then the next day I got out and I had to go to the IIT-Chicago campus and I didn't know how to go there. So I asked a few people and they told me to go to 31st. The school was on 33rd Street. They said, "well you walk out and go a few more blocks from here to State Street." I had no idea where State Street was. So anyway, I asked some people and they told me how to go. I got in the bus, but I didn't know where to put the money, because in this country there are no conductors who will collect money and give you the ticket. So I got into the bus and the bus driver told me: "Give me the money." So I had the money with me, of course, and I asked him how much it was and then he told me that. He said where I should put the money, right next to the bus driver. So that was kind of surprising to me because there were no conductors and the bus was running with very few passengers in it. And I went to IIT-Chicago. So that was the first day in the United States for me.