"My daughter in law and all were waiting with garland and all for my first time." 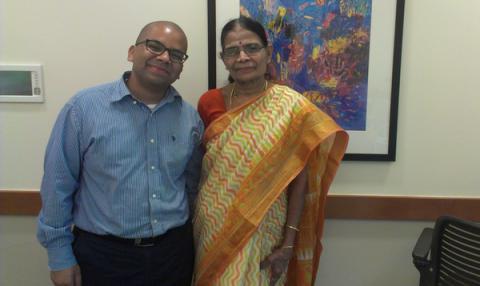 
I am Prema Raghavan from Chennai. In 1997, first I came April 12th for my daughter’s delivery in CA Sunnyvale, this was my first travel and there was a big pilot strike in Chennai. Then another one also depended on me and she came with me. We had four bags. First first i went to the airport and saw and there were so many counters to get into, and we had to get to Singapore but I stood in Air India. I thought we were going to Singapore, but turns out we were going to Malaysia and from Malaysia then we had to catch the Singapore flight to San Francisco. I know very little English, not American English, but I know. And then we landed in Malaysia and I thought our baggage would go straight to San Francisco, but he put it into the Malaysia and we stopped at Malaysia and I kept searching round and round for my bags. Nobody could help me. And then at last I finally found them, nearby it was, and had to carry all four, but could barely get them on the security counter. I had only twenty dollars, so I gave a sweeper five and he put the bags up for me and we went to Singapore. When we reached Singapore, that 11:30 flight had gone away. And so many people were late thanks to the pilot strike. So many people needed to get there that we had to get on a waiting list. At last the man, he couldn't even pronounce my name, he said “parma parma?” he finally got a flight and we reached San Francisco at 5:30 in the evening. I am a vegetarian and do not like to eat food on planes, so I keep some fruits with me, and at the end of the plane ride the attendant said “you are very adjust with us, did not have any meals at all, so we want to give you one hundred dollars.” So I got a watch for myself and a doll for my grandson and I was very happy. When I went to the baggage claim, three/four bags had not come! Waiting waiting waiting, after two hours I was waiting and waiting and they didn’t come, they said it would be late. My daughter in law and all were waiting with garland and all for my first time. It finally came outside my house two days later. I got to get some new clothes for me! But when I saw my daughter and son-in-law, I am very happy and scared. I could not call from Singapore even so I would give them a missed call from Singapore and then they would call me, and I reassured them I had gotten to Singapore. It was a very thrilling and achievement, my first trip to San Francisco on 12th 1997!